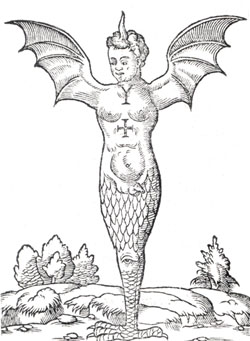 Very widely documented in many contemporary publications, the monster of Ravenna was one of the earliest monstrous births to attain international notoriety.  A child was born with severe birth defects in the Italian city of Ravenna.  Shortly thereafter, Italian forces were defeated in the Battle of Ravenna.  The monstrous birth then became a symbol of the Italians’ defeat, brought about by their moral turpitude.

As well as making collections of instances, humanist authors pored through the works on prodigies of classical authors such as Pliny, whose Natural History depicted Africa as a source of the exotic.

Pliny the Elder (23-79 A.D.).  (Historia naturalis.  Venice, 1499)  focussed not on individual monstrosities but on the monstrous races believed to inhabit the more remote parts of Africa and Asia.  His compilations of current knowledge influenced Renaissance travellers’ tales and attitudes towards the indigenous peoples of lands visited and colonized.

Classical texts were also translated into the vernacular, and illustrated for popular consumption.

Julius Obsequens, Des prodiges. Plus trois livres de Polydore Vergile sur la mesme Matiere (Lyon, 1555)
Obsequens was a Roman writer from the 4th century A.D., whose work on prodigies was first printed by the Venetian humanist printer, Aldus Manutius in 1508.  It is here accompanied by a treatise from the pen of Polydore Vergil, an Italian scholar and theologian.  In such texts and translations, we see the eschatological concerns of the early modern period superimposed on classical naturalism. 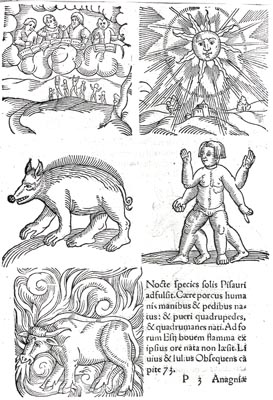 Konrad Lycosthenes (1518-1561) also collected a wide range of unusual phenomena, partly in order to show the hand of God at work.

Konrad Lykosthenes, Prodigiorum ac ostentorum chronicon (Basel, 1557)
Born Konrad Wolffhart, Lycosthenes was an Alsatian humanist and Protestant.  His work was widely translated.  Note his citation here of Julius Obsequens.  Although he did not attribute every unusual event to the direct hand of God, it was a frequent explanation that he offered for more preternatural events.  Such works were widely popular throughout Europe, but especially in England, where providential interpretations of unusual phenomena were highly politicized until the late seventeenth century.

Sky-battle portent, from Anon., Eniautos terastios (London, 1661)
However, an interpretation in terms of special providence was by no means the only resource available.  Since God had written the Book of Nature, the marvels that were occasionally to be seen might well be expressions of God’s general providence, providing less pointed lessons for sinful humanity.  Individual freaks and monsters might well be the result of an over-active maternal imagination, a subject touched upon by sixteenth-century authors such as Michel de Montaigne and increasingly prominent in later centuries.

Naturalists produced images of the monstrous, to show the astonishing variety of Nature’s works, as in these images of a two-headed fish and a landfish by Konrad Gesner, Historia animalium. Liber IV (Zurich, 1558).  Gesner, a Swiss Protestant, was the most famous naturalist of his day, and he aimed to have a genuinely encyclopedic scope in both coverage and sources consulted.  He corresponded widely with naturalists throughout Europe.  His desire to be comprehensive led him to include both mythical and real monstrous beings.  His stress on marine monsters is probably due to the biblical idea that sea life was particularly well-developed and unusual.  One might compare the monsters depicted by the contemporary mapmaker, Sebastian Münster, which positively teem in the sea. 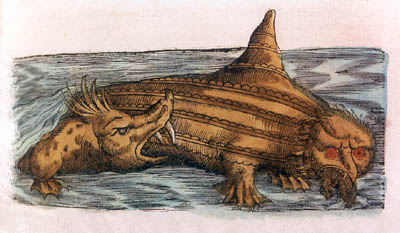 Called "the German Strabo," Sebastian Münster was a geographer, cartographer, Hebraist, and theologian. His work focused on topography and history in a humanist tradition. First issued in 1544, the Cosmographia was reprinted and expanded in 1550 with many new maps and town-plans, in keeping with the growing appetite among readers for new topographic and geographic records.  Mapmakers were not above decorating their maps with fantastic images of the animals and exotic humans to be found in farflung corners of the Earth, especially the New World.  In this, they relied on travellers’ tales and classical texts rather than their own imaginations.  Diogo Homan’s 1558 map of Brazil and Patagonia is an especially vivid example of this tendency. detail of cannibals

The New World was also the source of prodigious new fauna, as in the meticulous classificatory work of the Jesuit J.E. Nieremberg and the lavishly illustrated work of Montanus.

An influential and widely circulated work was that of the eminent (Huguenot?) surgeon, Ambroise Paré, Des Monstres et prodiges (Paris, 1573).  He illustrated a wide range of monstrosities, including the conjoined twins and the child born with the face of a frog, shown above.  [This book is available in a modern English-language edition.] 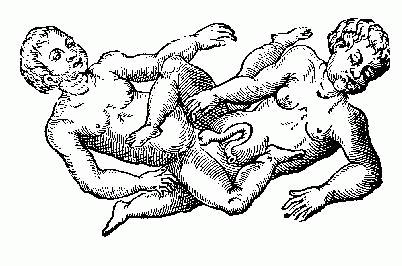 Fortunio Liceti (1577-1657), an Italian physician, insisted on wonder rather than horror.  He criticized the association of monsters with divine wrath, pointing out that the word ‘monster’ came from the Latin verb ‘monstrare,’ meaning ‘to show.’  Monsters were not signs of God’s punishment but creatures to be displayed because of their rarity. The creatures on his title page were probably well known and include the monster of Ravenna at the top. (De monstrorum caussis, natura, & differentiis libri duo, Padua, 1616.)

The cabinets of curiosities created by many early modern naturalists were often designed to exhibit just such exemplary phenomena, whether created by nature or by human artifice.  This was the case with the collections of Athanasius Kircher SJ, at the Collegio Romano, and those of Ole Worm, shown here in the posthumous catalogue. 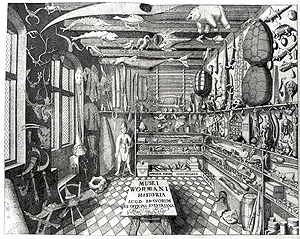 Ole Worm (1588-1654), professor of medicine at Copenhagen, had a huge collection, part of which is seen here: rare and exotic animals, plants, and minerals, including a crocodile and an armadillo mounted on the right-hand wall.  His collection was purchased after his death by Duke Friedrich III of Schleswig-Holstein.

There was a general interest in wondrous phenomena as part of nature, which very gradually overwhelmed the providential view of monstrosities.

On 12 November 1661, a squid was fished out of the North Sea. The creature died within hours but was subsequently embalmed by Johannes van Horne, a professor of medicine from Leiden. Because no such animal had ever been seen before, it was displayed to the public at the egg market.  This poster shows the squid on the beach with the villages of Scheveningen on the left and Katwijk aan Zee on the right, in the background.

Throughout early modern natural history and natural philosophy, knowledge was desired of those objects and creatures that formed the boundaries between different categories, or which appeared to transgress the established categories into which natural phenomena had been classified.  Thus the study of the boundary between the natural and the preternatural involved the explorer and the demonologist, as much as the naturalist and the anatomist.