The castle of Bamburgh, where lived the kings of Northumberland, of an austere appearance, was perched on a granite headland at the end of a vast strand, a small village nested against its sides. During a certain time, these already lugubrious places were transformed into a source of pain and desolation. That occurred with the second marriage of a sovereign which lived at this time.

This king was widowed and an extremely old man, and he had two children. His son, Childe Wynde, waging war far way when they celebrated the new weddings. Her daughter, the young and charming Margaret, made good greeting to her future mother-in-law.

The new lady of the manor, of a cold beauty and haughty ways, was also, said people, of a cruel nature. At the time of the banquet, her distant attitude caused the surprise of the courtiers. When the songs succeeded the drinkings, the general favour went to Margaret, and comparisons were established between her and the married, unfavorable to the last one.

The night came, whereas everyone rested in the castle, the queen put herself at work. Weighed down by the good expensive meat and the generous wine, the king whirred. She threaded in the court lit by the moon and traced on the ground mysterious symbols by murmuring incantations.

A little later, Margaret woke up, with an odd taste in the mouth, the limbs strangely heavy. A terrible hunger tortured her. Something shone in the dim light. It was a clawed paw, covered with shinning scales which shone under the moon. The young girl had a shiver of horror because the paw made a jump in her direction. She pushed a raucous cry which did not have anything human and rolled to the bottom of her bed. Then the large tail, with which she was equipped from now on, was agitated furiously, crashing in to pieces in it passage all the furniture of the room. At the end, the dragon newly born, exhausted because of so many emotions, collapsed on the ground and fell asleep.

The following day, in the bright morning, the castle fills of cries and lamentations. Pushed by the hunger, the dragon which Margaret was now became had slipped to the bottom of the stairways and had penetrated in the court, where arrived the odor of a herd of sheep feeding in the vicinity. Descending the hill, it had precipitated and made devastation. At satisfied present, it was held rolled up around a rocky outcrop called Spindlestone Heugh to enjoy the tepidity of the morning sun.

People were terrified. They took counsel from wizards; they denounced the criminal action of the new queen and indicated the means of breaking enchantment. ‘If you want to see Margaret taking again his real appearance and the queen to receive a right punishment, send someone seek Childe Wynde beyond the seas’, advised the wizards.

Thus this was made, although the king, decreased by the age, had refused to believe the wickedness of his wife. The dragon remained, it presence frightening and mephitic, but it ceased devastating the herds in exchange of a daily ration of milk. It is all they could do, because nobody knew how to extract the soul of Margaret to his prison of scales.

Overseas, the news came in Childe Wynde. He brings together his companions and set sail towards England, on board a ship out of wood of sorb, well-known for its resistance to the powers of evil. But an adversary caused by the capacity magic of the queen awaited the warriors. When they were in the sight of the crenelated ramparts of the castle, an terrifying spectacle was offered to their eyes. A whole band of sprites danced on the peak of the waves, formless shades almost invisible if were not for their dazzling teeth and their blazing eyes. They made circle, such as bats, around the mainmast but the skittle of sapwood fills its goal and they could not damage the ship. At the end, exhausted, the sprites regained the trough of the waves and, tossed like bung, saw the ship gain the shore.

But the queen, alone in her room, she was conceiving other magic spells. The dragon unrolled its rings and slipped towards the strand, feeling reluctant to oppose to the vessel of which it recognized the flags, but unable to resist its impulse. It thrown itself to water and, with powerful beats of it’s tail, went ahead of the ship. It gave face against prow. There was a great cracking and the oarsman fell from their banks. Two times, Childe Wynde and its crew began again to sail and twice still the dragon made blocade. At the end, Childe Wynde managed to gain without encumbers a small split rather far away from the castle. He approached on a pebble beach and jumped to ground with his archers. Suddenly, a company of gulls spouts out close to the dunes and a thick fog wrapped the men. A scaly muzzle bored the fog, and they saw shining an eye of the size and the color of a lemon, covered with a heavy twinkling eyelid.

Childe Wynde holds up his sword, ignoring that this monstrous body was used as prison to her sister, and his companions tightened their arc. Then the dragon opened the mouth and pushed a great cry. Within the tumult, Childe Wynde distinctly heard the voice of Margaret who indicated him the way on how to saves her.

The knight made move back his men, shelter his sword and, kneeling in front of the animal of which the breath burned his cheeks and his eyes, twice he kissed the poisonous scales very close to the hooks. The sharp blades lacerated his mouth, but he gave the final kiss and the dragon started to decay. Its glance darkened and its body fades like a dead leaft. There remained soon only the yellow envelope and emptied which, after, disappeared. Instead, hold was held thin naked girl, the smooth and soft skin like the one of a new-born baby. It was Margaret. Childe Wynde hastened to protect her from the marine breeze by covering her with his coat. Then, accompanied by the men-at-arms, the brother and the sister moved to the castle.

The joy was quite complete when they arrived, but the young man wanted to finish his task. He went in the room of the queen witch, whose magic capacities had disappeared as soon as the sapwood skittle had touched the strand. He found her packed on herself in a corner of the room. Her eyes shone of fear when she saw him taking out of his pocket a branch of the same sorb which had been used for the built of the ship, and she was packed even more still without uttering a sound. Then the rod touched her and she pushed a long howl which was completed in a raucous croaking. The queen had lost her human appearance and instead of her was standing, tiny and very wrinkled, a toad.

Childe Wynde moved back, seized of dislike, then he started to laughing. Like escaping the mockery, the toad leaps out of the room, tumble down awkwardly the stairway of the keep and went to take refuge in some hole of the wet cave. They never see her again. Only a weak painful croaking spouted out sometimes from the underground galleries. 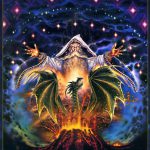