According to Isidore de Leville, there are marine dragons (anguis), earth dragon (serpents), air dragons (draco) and draco marinus which master sea and air. Dragons are always related to the elemental spheres and moreover they tend to personify each of separate element. 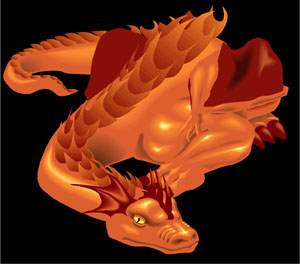 The element of Air governs the eastern quarter of the circle. Its dragon ruler is Sairys (sair’-iss), who oversees the dragons of breezes and winds. Its colour is pure yellow; it is considered warm and moist. The positive associations of Air are: sunrise, spring, the breath, optimism, joy, intelligence, mental quickness, renewing. Negative associations are: frivolity, gossip, fickleness, inattention, bragging, forgetfulness.

Dragons of this element belong to a family of Draconic beings whose subspecies include those of wind, storm, and weather. At times they join forces with the dragons of fire and volcanoes, seas and other waters, mountains and forests, and chaos. Just as no one element works totally alone, whether in magickal endeavours or physicals activities, elemental dragons join their great powers to accomplish tasks. Sometimes there is conflict of elemental powers, producing great atmospheric and environmental disturbances, but mostly the elementals work in harmony.

The element of Earth rules the northern quarter of the circle. Its ruler is Grael (grail), who oversees the dragons of mountains, land, minerals, gems, and moonbeams. Its colour is clear, dark green; it is cold and dry. Positive associations of Earth are: midnight, winter, respect, endurance, responsibility, stability, prosperity, thoroughness, purpose in life. Negative associations are: rigidity, unwillingness to change or see another side of a problem, stubbornness, lack of conscience, vacillation. Earth-element dragons are the most placid, unless they are required to stir up great disruptive energies such as earthquakes. The subspecies belonging to this element are the dragons of the mountains and forests and those of desert and arid regions. As might be easily guessed, the element of Earth often works closely with dragons of fire and volcanoes and those of chaos and destruction.

Dragons of Wind, Storm, and Weather

Dragons of wind and storm and weather are long, slender dragons, some of them with great gauzy wings, others with the Oriental "flying-lump" on their foreheads. Down the spine of the back flutter thin fringes of membrane tissue. The tend to be pale yellows and pale blues, but change to angry red-orange, purple, or black when they call up storms. Long, feathery antennae rise above their eye ridges.

They are excellent helpers to control excesses in the weather; getting things moving in your life, especially in the areas of creativity and the mental processes; protection; flexibility of the mind; openness to new ideas; sweeping away obstacles, most of ten in a dramatic fashion. Sometimes these dragons have feather-looking scales that surround their eyes and necks. Such a dragon was the British Henham dragon, which was well documented in 1669. It was described as being only about nine feet long with small wings and rather curious eyes surrounded by ‘feathers’. The Henham dragon put in repeated appearances before a number of observers for several years before it disappeared.

The element of Fire governs the southern quarter of the circle. Its dragon ruler is Fafnir, who oversees the dragons of Fire and the sunbeams. Its colour is pure red; it is considered warm and dry. The positive associations of Fire are: noon, summer, the sun, blood, enthusiasm, activity, change, passion, courage, daring, will power, leadership. Negative associations are: hate, jealousy, fear, anger, war, ego, conflicts, lightning. Subspecies of the Fire-element dragon family are those of fire and volcanoes. The subspecies of desert and arid-region dragons, and those of chaos and destruction, often work closely with draconic entities of this element. Dragons of Fire and VolcanoesFire dragons are all shades of reds, oranges, and deep yellows. They have thick, heavy bodies and long snakelike necks and tails. Some of them sleep in dormant volcanoes for long periods of time before they once again become activeThese dragons are also visible in forest fires and large structure blazes. They are very unpredictable, unreliable, and difficult to work with. If not properly handled, and then only within a cast and sealed circle, fire dragons will do as they please with a magician’s spell. They will achieve the asked-for end result, but may "burn" their way through everything to get there. Dragons of Fire and volcanoes help with personal purification on all levels of being, energy, courage, stamina to pursue goals and finish projects, remove obstacles and barriers. Be very certain you want their help in the barrier-removal, for these dragons will go through and over anything and anyone to achieve the goal. The results can be swift and difficult to handle emotionally.

Dragons of the Seas and Various Waters

Dragons who dwell in the seas, lakes, rivers, ponds, and other bodies or water, whether large or small, are basically shaped like Oriental Dragons. They are usually long and serpent-like, usually without legs or wings.

They are a variety of shades of blue, from silver-blue to dark blue-green. In fact, their shades cover all the hues of the water in which they reside. All of them have a silvery hue to their scales with some shade of blue predominant on the belly scales. They have feathery fringes about their mouths and down their backs. They have large horny eye sockets set in a rather flat snakelike head. These dragons can be very large or very small, depending on their dwelling place. Dragons of the seas and various waters help with emotions, either calming them or breaking through a barrier built around them; movement, both to get events moving and to keep things fluid; calmness on all levels of being and in all circumstances; creating changes, especially those brought about by breaking free of people who control us through our emotions.

Sightings of these creatures is so well documented that one can dismiss the sceptics’ observations that people are only seeing dolphins, squids, or other common water creatures. Sea dragons have been seen all around the world, but especially off the coasts of Scandinavia, Denmark, the British Isles, and North America, as well as in various lochs, lakes, and rivers.

No other Draconic species have been so well documented as those of the various waters. Not only in stories and myths, but official records of several governments

Dragons of the Mountains and Forests

Dragons of the mountains and forests generally have the look of the Western Dragon, with heavier body, four legs, huge wings, long neck, and tail. Mountain dragons are much heavier looking in the body than those of forests.

Dragons of the mountains and forests help to build long-lasting foundations in life; long-range goals; stability; physical and mental endurance; responsibility and sometimes the strength to stand up under existing responsibilities; enduring prosperity and success that come through personal effort and planning.

Forest dragons inhabit stretches of deep forests, groves, sometimes solitary clusters of trees. They like the changing pattern of sunlight through the branches and leaves. They tend to get upset and sometimes belligerent if their forests are damaged or destroyed without a good explanation.

Both mountain and forest dragons have been known to inhabit areas close to human towns and farms. Sometimes this created conflict, sometimes not, depending upon the behaviour of the humans. After the belligerent Christians gained power, dragons were hunted with great determination, until they withdrew from the physical plane.

Some of these dragons are of the variety that at one time lived in or around barrows or burial mounds, especially if there was treasure inside.

Mountain dragons usually are found in the high, rocky peaks or rugged outcroppings. Some of the older ones staked out their domains on the very top where the wind and snow caress their great bodies.

Dragons of both the mountains and forests are shades of greens, browns, and blues and often have upright rows of sharp scales down their necks and backs.

Dragons of Chaos and Destruction

These dragons represent the negative power currents necessary to dissolve problems and sweep away troublesome people. The are of very dark colours: black, grey, pewter, iron, dark magenta, purple, reds and greens so dark they appear black. Their bodies are heavy and huge; in fact, they are the largest of all dragons. Their wide wedge-shaped heads sit atop long necks. Their serpentine tails are either barbed or with a spiked knob on the ends. Enormous wings carry them on swift flights.

When dragons of chaos and destruction make changes and help in rituals, they do everything in a big way. They go past your limited view of happenings, straight to the heart of the problem, so be certain you can stand their help before you call on them. These dragons work with re-creation of lives, relationships, and careers; breaking of barriers; changing luck; vast changes in general; work on past lives; divination; the confining of enemies or anyone who will hinder you forward growth or movement.

Although dragons in general were looked upon as bringing disaster, depending of course upon their actions, chaos dragons are often quite literally omens of catastrophe. They can be seen in the area of disaster when other dragons create such things as great storms, earthquakes, or floods, but their power lies in creating or precipitating wars, bloodshed, plagues, and desolation when humans have gotten things out of balance. Unfortunately, it seems to take such occurrences to make humans want to find a better way of doing things.

Although the dragons of chaos and destruction create upheavals and complete transformations and rebirths, they are not evil. Their magick power is vital to the magician. They require as much forethought and caution as when working with Fire dragons. But if your life and plans have become static, your luck stuck in a negative mode, or circumstances or people are making you feel helpless and hopeless, then these dragons will turn the tide of events. Just be very sure that you are prepared for the drastic changes that will come.

As with many kinds of dragons, the chaos dragons are connected with death and rebirth, in fact more so than others of their species. Often, when riding the dragon in an attempt to destroy barriers and remove enemies, one finds oneself face to face with oneself – the worst enemy of all. This ride can turn into a dramatic rebirth for the magician if he is willing to accept what is being shown by the dragon. The element of water governs the western quarter of the circle. Its ruler is Naelyan (Nail-yon), who oversees the dragons of the seas, springs, lakes, ponds, and rivers. Its colour is pure blue and is cold and moist. Positive associations are: sunset, Autumn, compassion, peacefulness, forgiveness, love, intuition, calmness, peace of mind. Negative associations are: floods, rainstorms, laziness, indifference, instability, lack of emotional control and insecurity.

The subspecies of the element of water are those of seas and various waters. It is not unusual to find this element working in conjunction with dragons of wind, storm, and weather, mountains and forests, or those of destruction. 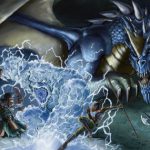