Powers: Some of the worst floods in Asia’s History were caused when a mortal has upset a dragon. Dragons were essentialy linked to the water element, influencing the weather and the water courses. 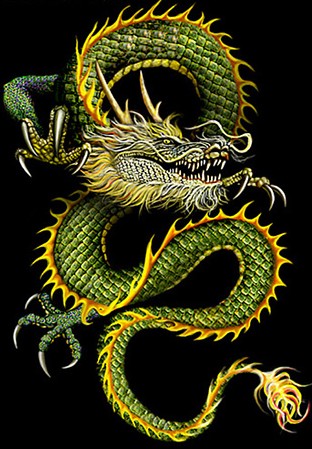 According to Chinese mythology, a dragon has to spend 1000 years under the sea, 1000 years in the mountains and 1000 years among men before turning into a real dragon. Before that he is a small serpent prisoner of a stone, called a “serpent’s egg”. After 3000 years, the dragon escape and take his adult form, the stone was known to spill a magic liquid called “inky blood”.

Friend/Foe : In the Eastern world the dragon has a rather different significance than in the West. He is essentially benevolent, son of heaven, and controls the watery elements of the universe.In many cases the dragon is combined with the phoenix to symbolize long life and prosperity. It is also combined with the tiger to represent heaven and earth or inyo (Yin and Yang).

Description : Having sinuous serpentine bodies and four legs, eastern dragons do not usually breath fire, nor do they fly.

According to Wang Fu (Han 206 BC-220 AC), dragons are made up of many different types of animals of the Earth: the body of a snake, scales of a carp, head of a camel, horns of a deer, the eyes of a hare, ears like a bull, a neck like an iguana, belly of a frog, paws like a tigers, and claws like an eagle. A lion-type mane decorates its neck, its chin, and each elbow. They also carry two antler-like horns on their wide-mouthed head, and two long whiskers spread out from their snout.

They are depicts in many colors like blue, black, white, red, or yellow. Oriental dragons are usually shown with a pearl in their mouth, under their chin, or in their claws. This is apparently where the dragon gets its power, and how it ascends to heaven. The male dragon holds a war club in its tail while the female dragon holds a sensu or fan in its tail.

There are many different kinds of dragons. Some live in the air, some live in the sea, and some live underground. The legends of China include a white lunar (moon) dragon. Others include the the Spiritual, The Dragon of Hidden Treasures, the Winged, the Horned, the Coiling, and the Yellow. The chinese have a dragon to help them for each circumstance of their life. In China dragons are known as Lung.Yu-Lung which looks like a fish give success to exams.

In the previous dynasties in China, there had been many documents recording eyewitness accounts of magical dragons. The most amazing events are the various "falling dragons," dragons that suddenly fell to the ground under peculiar circumstances, and were witnessed by many. A relatively recent tale occurred in the puppet Manchuria regime in August, 1944. A black dragon fell to the ground at the Chen Family’s Weizi Village, about 9.4 miles northwest of Zhaoyuan County, on the south shore of the Mudan River (the old name of a section of Songhua River) in Heilongjiang province. The black dragon was on the verge of death. The eyewitness said that this creature had a horn on its head, scales covering its body, and had a strong fishy smell that attracted numerous flies. 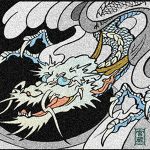