Perseus was the son of Zeus and Danae. Danae’s father, Acrisius, King of Argos. Disappointed by his lack of luck in not having a son, Acrisius consulted the oracle at Delphi, who warned him that he would one day be killed by his daughter’s son. Danaë was childless and to keep her so, he imprisoned her in a bronze chamber open to the sky in the courtyard of his palace. Zeus came to her in the form of a shower of gold, and impregnated her. Soon, Perseus was born. Fearful for his future but unwilling to provoke the wrath of the gods by killing Zeus’s offspring and his own daughter, Acrisius cast the two into the sea in a wooden chest. 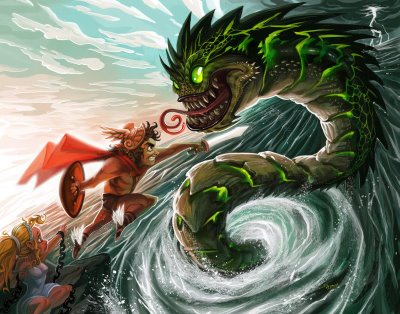 Danaë’s fearful prayer made while afloat in the darkness has been expressed by the poet Simonides of Ceos. Mother and child washed ashore on the island of Seriphos, where they were taken in by the fisherman Dictys, who raised the boy to manhood. The brother of Dictys was Polydectes, the king of the island. Polydectes later conceived a passion for Danae, but was unable to force his attentions on her because Perseus had grown into a redoubtable protector. To get rid of Perseus, Polydectes sent him on a quest to bring back the head of the Gorgon Medusa, a snake-haired maiden who turned all who saw her into stone.

Perseus begin to wander aimlessly, without hope of ever finding the Gorgons or of being able to accomplish his mission. Fortunately, the gods Hermes, Athena and Hades came to his rescue. They helped him acquire a pair of winged sandals, a wallet or satchel, and the cap of Hades; the sandals enabled him to fly, the satchel was to carry the Gorgon’s head, and the cap conferred invisibility on its wearer. They also told him to go to the island of the golden apples to the west. The Hesperides that he quickly seduced gave him the way to the Graeae against the promise that he will come back and dance with them. He went to the Graeae, sisters of the gorgons, three perpetually old women with one eye and tooth among them. Perseus snatched the eye at the moment they were blindly passing it from one to another so they could not see him and he would not return it until they had given him directions. Whatever happened he gor the information but threw the tooth and the eye into a lake.

In the cave he came upon the sleeping Gorgons. By viewing Medusa’s reflection in his polished shield, he could safely approach and cut off her head; from her neck sprang Pegasus and Chrysaor. The other two Gorgons pursued Perseus, but under his helmet of invisibility he escaped.

As he flew back over Africa on his way home, he encountered Atlas; in the course of a struggle, he used the Gorgon’s head to turn Atlas to stone (thereby forming the Atlas Mountains). He also dripped blood from the head onto the sands of the African desert, giving birth to the deadly vipers of that region, one of whom was to kill the Argonaut Mopsus. Later in the journey he saw the maiden Andromeda chained naked to a rock by the sea as a sacrifice to a water dragon called Cetus. He fell in love with her and bargained with her father, Cepheus, for her hand in marriage if he killed the monster. He succeeded in slaying the beast, but at the wedding feast Phineus, a jilted suitor of Andromeda, angrily demanded the bride. In the battle which followed, Perseus used Medusa’s head to turn Phineus and his followers into stone.

When he returned to Seriphus, he found that Polydectes was still persecuting Danae. He used the Gorgon’s head once again, and turned Polydectes to stone and made his brother Dictys, consort of Danaë, king. He then returned the sandals, satchel and cap to Hermes; the Gorgon’s head to Athena, who emblazoned it upon the aegis which protected her in battle. Finally he returned to Acrisius’ kingdom, where he fulfilled the prophecy by accidentally killed the king while throwing the discus. He had just invented the quoit and was making a public display of them when Acrisius, who happened to be visiting, stepped into the trajectory of the quoit and was killed. In another tradition, Acrisius had been driven into exile by his brother, Proetus. Perseus turned the brother into stone with the Gorgon’s head and restored Acrisius to the throne. Having killed Acrisius, Perseus, who was next in line for the throne, gave the kingdom to Megapenthes son of Proetus and took over Megapenthes’ kingdom of Tiryns.