In mid-1992, following the events of Godzilla vs. King Ghidorah, a meteoroid crashes in the Ogasawara Trench and awakens Godzilla. Six months later, explorer Takuya Fujito is detained after stealing an ancient artifact. Later, a representative of the Japanese Prime Minister offers to have Takuya’s charges dropped if he explores Infant Island with his ex-wife, Masako Tezuka and Kenji Ando, the secretary of the rapacious Marutomo company. After the trio arrives on the island, they find a cave containing a depiction of two giant insects in battle. Further exploration leads them to a giant egg and a pair of diminutive humanoids called Cosmos, who identify the egg as belonging to Mothra.

The Cosmos tell of an ancient civilization that tried to control the Earth’s climate, thus provoking the Earth into creating Battra, which became uncontrollable, and started to harm the very planet that created him. Mothra, another earth protector, fought an apocalyptic battle with Battra, who eventually lost. The Cosmos explain how the meteoroid uncovered Mothra’s egg, and may have awoken Battra, who is still embittered over humanity’s interference in the Earth’s natural order.

The Marutomo company sends a freighter to Infant Island to pick up the egg, ostensibly to protect it. As they are sailing, Godzilla surfaces and heads toward the newly hatched Mothra larva. Battra, also as a larva, soon appears and joins the fight, allowing Mothra to retreat. The battle between Godzilla and Battra is eventually taken underwater, where the force of the battle causes a giant crack on the Philippine Sea Plate that swallows the two.

Masako and Takuya later discover Ando’s true intentions when he kidnaps the Cosmos and takes them to Marutomo headquarters, where the CEO intends to use them for publicity purposes. Mothra enters Tokyo in an attempt to rescue the Cosmos, but is attacked by the JSDF. The wounded Mothra heads for the National Diet Building and starts constructing a cocoon around herself. Meanwhile, Godzilla surfaces from Mount Fuji.

Both Mothra and Battra attain their imago forms and converge at Yokohama Cosmo World. Godzilla interrupts the battle and attacks Battra. The two moths decide to join forces against Godzilla. Eventually, Mothra and Battra overwhelm Godzilla and carry it over the ocean. Godzilla bites Battra’s neck and fires its atomic breath into the wound, killing Battra. A tired Mothra drops Godzilla and the lifeless Battra into the water below, sealing Godzilla below the surface by creating a mystical glyph with scales from her wings. The next morning, the Cosmos explain that Battra had been waiting many years to destroy an even larger meteoroid that would threaten the Earth in 1999. Mothra had promised she would stop the future collision if Battra were to die, and she and the Cosmos leave Earth as the humans bid farewell. 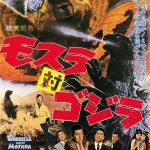 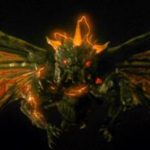 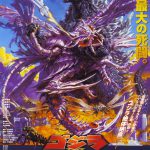