It is a dark and  stormy night.  A person driving sees a forlorn figure at the side of the road and decides to give him or her a lift.  Usually the  hitchhiker is a young woman in some sort of trouble… her prom dat  dumped her, or hercar broke down.

The driver gets to her house only  to discover that his passenger has disappeared without a trace from the back seat of his car.  He knocks on the door to the house, maybe to make sure the girl is ok, and the door is answered by the girl’s parent.  Eventually it comes out that the girl died some years ago, and every year on the anniversary of her death (or her birthday), the girl hitches a ride back home with a stranger.

It is interesting to note that this legend has made it into many regional folklores. In Hawaii, for example, the hitchhiker is often said to be the goddess Pele. It has already been mentioned that
La Llorona has also been connected with the story. In the Chicago area, the vanishing hitchhiker takes the form of Resurrection Mary. 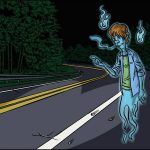