Bloody Mary is a ghost or witch featured in Western folklore. Bloody Mary Worth is typically described as a child-murderer who lived in the local city where the legend has taken root years ago.

As the story goes, a beautiful young girl named Mary Worth was in some sort of terrible accident (or  occasionally the wounds are inflicted purposely by a jealous party), and her face was hideously deformed.  From then on, she is shunned by other people, and she sometimes becomes a witch.  There is often a specific local graveyard or tombstone that becomes attached to the legend. She is said to appear in a mirror when her name is called three times or sometimes more, depending upon the version of the story, often as part of a game. 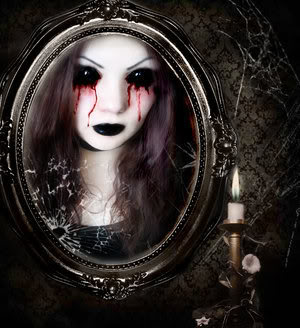 In some versions of the legend, the summoner must say, "Bloody Mary, I killed your baby, while raping her ." In these variants, Bloody Mary is often believed to be the spirit of a young mother whose baby was stolen from her, making her mad in grief, eventually committing suicide. In stories where Mary is supposed to have been wrongly accused of killing her children, the querent might say "I believe in Mary Worth."

The game is often a test of courage and bravery, as it is said that if Bloody Mary is summoned, she would proceed to kill the summoner in an extremely violent way, such as ripping his or her face off, scratching his or her eyes out, cutting his or her head off, driving the person insane, bringing the person into the mirror with her or scratching his or her neck, causing serious injury or death. Some think if she doesn’t kill the one who had summoned her then she will haunt them for the rest of their life. Other versions tell that if one chants her name thirteen times at midnight into a mirror she will appear and the summoner can talk to a deceased person until 11:08a.m., when Bloody Mary and the dead person asked to speak to will vanish. Still other variations say that the querent must not look directly at Bloody Mary, but at her image in the mirror; she will then reveal the querent’s future, particularly concerning marriage and children.. 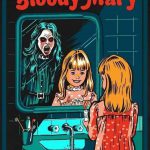