Quotes related to zombies in the Bible

“And this shall be the plague with which the Lord will strike all the peoples that wage war against Jerusalem: their flesh will rot while they are still standing on their feet, their eyes will rot in their sockets, and their tongues will rot in their mouths.” ― Zechariah 14:12 ESV

“Your dead shall live; their bodies shall rise. You who dwell in the dust, awake and sing for joy! For your dew is a dew of light, and the earth will give birth to the dead. Come, my people, enter your chambers, and shut your doors behind you; hide yourselves for a little while until the fury has passed by.” ― Isaiah 26:19-20 ESV

“And in those days people will seek death and will not find it. They will long to die, but death will flee from them.” ― Revelation 9:6 ESV

Quotes from The Walking Dead

“Christ promised a resurrection of the dead, I just thought he had something a little different in mind”. ― Hershel Greene

“In a world ruled by the dead, we are forced to finally start living.” ― Robert Kirkman

Don’t you get it? We ARE The Walking Dead!” ― Robert Kirkman

“When there’s no more room in hell, the dead will walk the earth.” ― Dawn of the Dead

“In those moments where you’re not quite sure if the undead are really dead, dead, don’t get all stingy with your bullets.” ― Zombieland

“You’re all going to die down here.” ― Resident Evil

“Now, I know you’re not supposed to have a hand gun until you’re twelve… but it can come in real handy.” ― Fido
Zombie Quote

“They’re coming to get you, Barbara.” ― Night of the Living Dead

“In the brain and not the chest. Head shots are the very best.” ― Fido

“Yeah, they’re dead. They’re all messed up.” ― Night of the Living Dead

“You know, surprisingly, they don’t sell a lot of brains in the local 24-hour grocery store around the corner from my house.” ― Rusty Fischer, Zombies Don’t Cry

“Nothing is impossible to kill. It’s just that sometimes after you kill something you have to keep shooting it until it stops moving.” ― Mira Grant, Feed

“Make the most of your life. You only live once. Unless of course the event of a zombie apocalypse!” ― Zombiesurviver

“The more I know about people, the more I love zombies.” ― J.J. Zep

“With anything, it either is, or it isn’t. There is no is isn’t. Except for zombies-who are both dead and not dead at the same time.

” ― Jarod Kintz, So many chairs, and no time to sit

“In you, she saw hope. You mean she saw his next meal.” ― Nicki Elson, Hans & Greta: a Twisted Fairy Tale Novella

“He was drop-dead gorgeous and I, well I was just … dead.” (Tera Hightower, Dead Chick Walking)” ― Ace Antonio Hall

“I don’t think anyone wants to cuddle a zombie.” ― Norman Reedus

“A zombie film is not fun without a bunch of stupid people running around and observing how they fail to handle the situation.” ― George A. Romero

“My friend “M” says the irony of being a zombie is that everything is funny, but you can’t smile, because your lips have rotted off.” ― Isaac Marion, Warm Bodies

“This is the way the world ends; not with a bang or a whimper, but with zombies breaking down the back door.” ― Amanda Hocking, Hollowland

“Dear girls, We like you for your brains, not your body. Sincerely, Zombies.”

“If I come back as a zombie I’m eating you first!”

“Asks for high five gets a bullet in the head.”

“A non-frightening zombie is a lame zombie.” ― Scott M. Gimple

“I love zombies. If any monster could Riverdance, it would be zombies.” ― Craig Ferguson 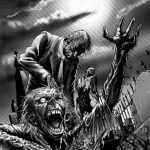