According to one of Bigfoot’s most prominent chroniclers, John Green, Canadian journalist/investigator, the creatures are about seven and a half feet in height. They are normally solitary in disposition and seldom seen in company of others.

Like a primate, Bigfoot is supposed to have reddish-brown/auburn hair covering nearly all parts of his body and a footprint ranging from 11 to 21 inches but averaging about 16 inches long and 7 inches wide. 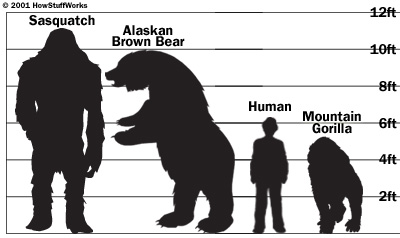 They also have broad shoulders, nonexistent necks, flat faces, large flat noses, sloped foreheads, brow ridges and cone-shaped heads. However, the proportions of their limbs are closer to that of a human than a primate. They are generally omnivorous, largely nocturnal, and mostly inactive during cold spells.

Bigfoot is commonly reported to have a strong, unpleasant smell by those who have claimed to have encountered it.  The enormous footprints for which it is named have been as large as 24 inches (61 cm) long and 8 inches (20 cm) wide.  While most casts have five toes—like all known apes—some casts of alleged Bigfoot tracks have had numbers ranging from two to six.

Both sexes and offspring have been observed, usually in summer and fall. Strong, agile, and fast, Bigfoot is a good swimmer and are often seen near and around bodies of fresh water; streams, lakes and rivers. They are also said to be malodorous and to communicate by grunts, howls, shrieks, or whistles similar to those of a mountain lion. Bigfoot enjoys a broad diet ranging from fish, rodents, and deer to fruits, berries and various vegetation.

Some pretend that they live in small groups of one male and 4 sometimes 5 females and that this is the breeding community. Then as they have offspring, the young females grow up and replace the adult females as they are dying.

The young males are grown up and they are driven out of the group by the adult male which tolerates no competition. These young males would then wander the countryside, growing up, getting stronger, looking for another social group where they can perhaps have a conflict or challenge the dominant male there, and hopefully take over.

As a rule, Bigfoot seems to stay away from humans even if he has been sometimes described as spying us. He can disappear quickly in such a manner that invisibility is recognized as one of his power. 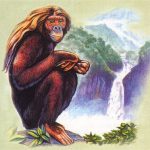