In Christian symbolism, the dragon has long been associated with the "serpent of old", the devil, also known as Satan.

In the Bible, the dragon was considered as an idol. The story of Daniel shows that Christian faith overcome any beast from hell. 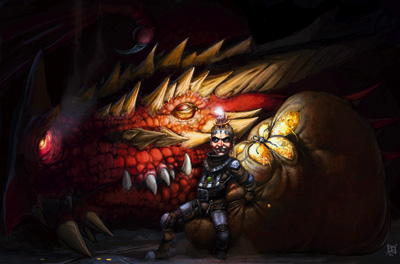 After Daniel exposed the idol Bel as a fraud, the king led Daniel to a dragon which the Babylonians worshiped, saying, "Behold thou canst not say now, that this is not a living god: adore him therefore." To which Daniel replied, "Give me leave, O king, and I will kill this dragon without sword or club. And the king said: I give thee leave. Then Daniel took pitch, and fat, and made lumps, and put them into the dragon’s mouth, and the dragon burst asunder. and he said: Behold him whom you worshiped. "[Dan 14:23-26 Douay-Rheims] After killing the dragon, Daniel was thrown into the lion’s den for six days and survived.

Its strong connection with the cult of the Great Goddess made it more than a local idol. Thus, the dragon which was a powerful symbol in many places in the same way as fairies, witches and other benevolent monsters was declared an enemy by the Church and became a creature of the Devil, an incarnation of the evil forces. This transfiguration is already present in Greek mythology: Appolo slew Python, prophetess of the oracle of Delphi, Herakles killed the Hydra and Ladon, the son of Mother Earth; even the Eden serpent is represented with a human face which is an attribute of the Earth Goddess.

Tales of battles between heroes and dragons personify the triumph of good over evil and sometimes dramatize the victory of a community over the plague or a natural disaster. They can also betoken a personal struggle against sin or illness.

Dragons are popular attributes of many saints including St. George of the Cappadocia, St. Philip the Apostle, St. Martha of Tarascon, St. Radegund of Poitiers, St. Victor of Marseille, St. Andrew of Aix-en-Provence, St. Armentaire of Draguignan, and St. Michael the Archangel. These saints and Christ are often shown crushing a dragon under foot and thus representing the triumph of Christianity over the forces of evil, and the banishment of paganism from a land.

The emperor Constantine ordered a representation of himself killing a dragon with his lance made to memorialize his conversion to Christianity.

Medieval artists occasionally replaced the familiar serpent under the Virgin Mary’s foot with a defeated dragon to pictorialize the Genesis prophecy: "He shall bruise your head, and you shall bruise His heel." [Gen 3:15].

The gaping "Jaws of hell", which is classic in paintings and sculptures of the Middle-Ages, belong to the anatomy of a fire-breathing dragon.

Probably ther most infamous dragon in hystory, the Hydra of The Apocalypse is described as being a great red dragon with seven heads, ten horns and seven crowns upon his head. In the Koran, the dragon of the Apocalypse is named Dabba.

In parts of Africa where the dragon is also considered as an evil power, the monster was believed to be the result of the unnatural union of an eagle and a she-wolf.

Nevertheless, the oriental dragons in the East part of the world still retain their virtues of wisdom, fecundity and benevolence