Some dragons have very bird-like attributes, such as feathers. Quetzalcoatl the feathered serpent is an example of this. Some dragon myths have alternate versions, in which the dragon is a type of bird, showing how similar they are in some instances. It’s possible that in the past exotic birds were mistaken for dragons. As people had not seen such creatures before, they could well be misinterpreted as some some kind of mystical creature.

The crocodile’s size and potential ferocity make it a likely candidate for inspiring dragon myths (of the dragon eating people variety). The most dangerous types of crocodile are those that eat mammals in the wild. A crocodile is about three meters long when it starts to hunt for larger mammals. Usually, crocodiles are not that dangerous but in areas where they are used to eating humans (such as prisoners being fed to them, or dead bodies thrown in the water), they become far more likely to attack and kill.

Alligators are generally more passive than crocodiles. They rarely attack unless provoked. Most modern attacks happen when an alligator mistakes a human for prey, though the human often fights back, and the alligator retreats.

It is possible that the Biblical dragon Leviathan was a giant crocodile. To support tis theory, there are various cases of the skin of a slain dragon being kept as a trophy, which turned out to be crocodile skin.

People throughout the world use to believe that dinosaur bones were the bones of a dragon. Although these people had no idea of the real truth behind the bones, the connection to dragons is an appropriate one. Whether you believe that dragons are ferocious carnivores or peaceful herbivores, there is a dinosaur equivalent. However, dinosaurs are a bit thick compared to most dragons. The large, dragon sized dinosaurs had very little brain capacity. The more intelligent dinosaurs were far smaller. Their bones were probably mistaken for the bones of large mammals. Large dinosaurs also could not fly, which is something a good number of dragons can do.

There are various modern stories about dinosaurs still being alive, such as the Loch Ness monster. If any dinosaurs are still alive, and if people met them, they definitely would have inspired dragon stories. 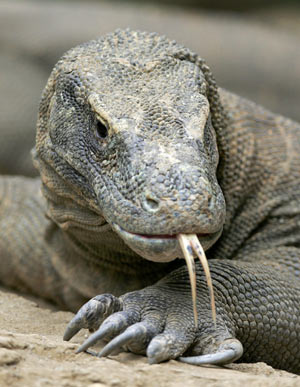 Many lizards have inspired dragon stories. The Komodo Dragon is the largest. It is a type of monitor lizard. It grows to about three meters long. The Dragon has a shorter tail than most monitor lizards, so has a much bigger body than another lizard of the same length. They live on the islands of Komodo, Padar and Kintja, and the western part of Flores. An adult Dragon will hunt animals such as goats and pigs. They have been know to attack people but normally leave them alone. Humans are probably just too much bother to hunt. Komodo dragons are capable swimmers. Perhaps that is how they spread between the islands. Water is the ancient element of the dragon. Seeing the Dragons in the water must have aroused suspicions in those that saw them. Komodo dragons also conform to the notion of fire and dragons. Their tongue flicking in and out can look like a small flame. 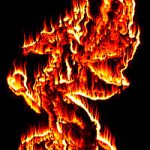