Infrasound is sound that is lower in frequency than 20 Hz (Hertz) or cycles per second, the normal limit of human hearing. Hearing becomes gradually less sensitive as frequency decreases, so for humans to perceive infrasound, the sound pressure must be sufficiently high. The ear is the primary organ for sensing infrasound, but at higher levels it is possible to feel infrasound vibrations in various parts of the body. 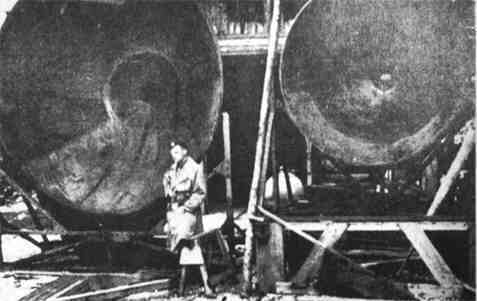 Infrasound were used by the Nazis during WWII

The Ghost in the Machine

Computer specialist Vick Tandy from Coventry University always considered all legends about ghosts a nonsense and never took them seriously. Once he traditionally spent his evening working in a laboratory when he suddenly broke into a cold sweat. Vick felt somebody was watching him with sinister eyes. Then the sinister something assumed a gray material form, crossed the room and approached the scientist. In the vague outline Vick could discern legs, arms and fog where the figure must have a head; there was a dark spot in the center of the fog which might be a mouth. In an instance, the vision disappeared in the air without leaving a trace.

As soon as Vick Tandy recovered after the first fear and shock he started doing as a scientist: he started looking for the cause of the unusual phenomenon. Hallucinations might have been the easiest way to explain the phenomenon. On the other hand, Vick didn’t use drugs, was moderate in drinking alcohol and coffee. As for weird forces, the scientist strongly disregarded them. So, Vick Tandy decided to look for ordinary physical factors that might explain the phenomenon.

Soon Vick Tandy managed to discover the factors quite accidentally. Vick’s hobby, fencing helped him with it. Some time after the scientist saw the "ghost" he brought his rapier to the laboratory to set it right before a forthcoming fencing tournament. Suddenly Vick felt the blade gripped in a vice started vibrating more and more as if some invisible hand touched it.

"Some invisible hand" might have been suggested as a probable explanation of the phenomenon by ordinary people but not by a scientist. That is why Vick Tandy suddenly arrived at a conclusion that the moving of the blade was resonance oscillations caused with sound waves. This is just exactly the same when we hear tea services clink in a buffet when music is thundering in the room. But in fact, it was actually very quiet in the laboratory. To be sure, Vick Tandy measured the sound in the laboratory with special apparatuses. He was surprised to see that the sound in the room was unimaginable; the sound waves were very low, although the scientist couldn’t hear them. That was infrasound. It took the scientist a lot of time to find out the source of the infrasound; it was emitted by a recently set ventilator in the air conditioner. As soon as the air conditioner was switched off, the blade stopped vibrating.

Infrasound is very surprising by itself. For many years seamen were pondering over the mystery of "flying Dutchmen", ships that wandered around the seas without crews on board. The ships were in good repair, but there were no people on board at all. Where have they gone? Well-known vessel Maria Celesta was the last of such ships; that was a wonderful schooner noticed by some other vessel in the ocean. When the vessel approached Maria Celesta and its seamen entered the schooner, they were astonished to find hot dinner and entries recently made by the captain in the ship journal. There were absolutely no people on board of Maria Celesta. They disappeared but no traces could be found.

Vick Tandy supposed that his night vision might be connected with infrasound as well. When he measured the infrasound in the laboratory, the showing was 18.98 hertz, just exactly the frequency under which a human eyeball starts resonating. So, to all appearances sound waves made Vick Tandy’s eyeballs resonate and produced an optical illusion: he saw a figure that didn’t exist in fact.

Further investigation of the phenomenon revealed that sound waves of this low frequency may appear rather frequently under natural conditions. Infrasound arises when strong gusts of wind clash with chimneys or towers. These heavy basses penetrate even through very thick walls. Such sound waves start rumbling in tunnel-shaped corridors. This is the reason why people often come across ghosts in long serpentine corridors of ancient castles looking like tunnels. Strong winds are quite typical of Great Britain.

Vick Tandy published the results of his research in the magazine of the Society of Physical Researches. The Society was formed in 1822 to unite British parapsychologists and naturalists; the Society is working to find reasonable explanations to paranormal phenomena. This is quite understandable that professional "ghost busters" got enthusiastic with Tandy’s idea. Leading parapsychologists of Great Britain think this idea will help give explanations to many of mysterious phenomena.

However, other scientists call the idea into question. Physicists studying effect of infrasound upon the human body say that volunteers participating in their experiments complain of weariness, high pressure in the eyes and in the ears, but never mention hallucinations or ghosts. At that, physicists say that drivers also have no optical illusions when cars overcome the air drag at a really high speed and the level of infrasound waves is very high.

On May 31, 2003, a team of UK researchers held a mass experiment where they exposed some 700 people to music laced with soft 17 Hz sine waves played at a level described as "near the edge of hearing", produced by an extra-long stroke sub-woofer mounted two-thirds of the way from the end of a seven-meter-long plastic sewer pipe. The experimental concert (entitled Infrasonic) took place in the Purcell Room over the course of two performances, each consisting of four musical pieces. Two of the pieces in each concert had 17 Hz tones played underneath. In the second concert, the pieces that were to carry a 17 Hz undertone were swapped so that test results would not focus on any specific musical piece. The participants were not told which pieces included the low-level 17 Hz near-infrasonic tone. The presence of the tone resulted in a significant number (22%) of respondents reporting anxiety, uneasiness, extreme sorrow, nervous feelings of revulsion or fear, chills down the spine and feelings of pressure on the chest. In presenting the evidence to British Association for the Advancement of Science, Professor Richard Wiseman said, "These results suggest that low frequency sound can cause people to have unusual experiences even though they cannot consciously detect infrasound. Some scientists have suggested that this level of sound may be present at some allegedly haunted sites and so cause people to have odd sensations that they attribute to a ghost—our findings support these ideas.