Origin: Norse. He is the son of Loki and Angur-boda.

Description: This serpent lives in the sea, and encircles the earth. He is so long that he has swallowed his own tail.

Myth : This serpent was one of Loki’s children, and was thrown off of the Sacred Ash, Yggdrasil, by Odin when it was just a little baby. However, this small serpent grew to encompass the world, and now the huge serpent twines around the earth, twisting and writhing. This dragon-snake had many run-ins with the mighty Thor, and the two of them will face off during the final battle on Earth called Ragnarok.  Thor managed to kill the monstrous serpent with his hammer, Moljnir but its last breath was a poisoned cloud which killed the mighty God. Given the cyclical nature of the Universe, the battle is going to happen again and again. 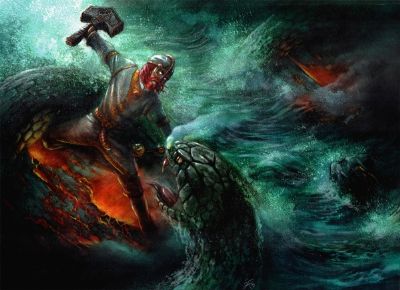