King Ghidorah (キングギドラ, Kingu Gidora) is a three-headed dragon that first appeared in Ishirō Honda’s 1964 film Ghidorah, the Three-Headed Monster. He was as the primary antagonist in the 2019 film Godzilla: King of the Monsters and mentioned in the 2021 film Godzilla vs. Kong. He was revealed to be the final villain that controlled Mechagodzilla. 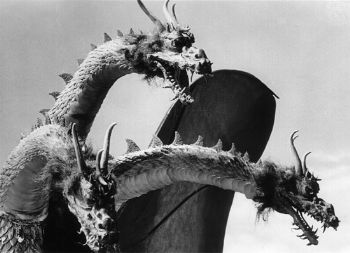 Ghidorah, the ultimate evil, is a planet-destroyer monster. It travels through space as a meteor but shows up as a golden, three-headed, bat-winged dragon with two tails. Ghidorah first appeared in Ghidorah the Three Headed Monster. A woman delivers a message from the martians (venusians) regarding the coming of an new monster that already destroyed Mars’s (Venus) city, Mellenia, before. Rodan and Godzilla were about to break out and start to destroy Japan when Mothra (in larva form) convinced both of them that they needed to work together to fight Ghidorah, who was just born out of a meteorite.

Mothra first resisted Ghidorah alone but was about to give away then Godzilla and Rodan had a change of heart and helped defeat Ghidorah. It was a long fight but Ghidorah eventually retreated into space.

Later the monstrous dragon lands on Planet X, where it tries to pursue its celestial reign of terror in the sequel Invasion of Astro-Monster (or Godzilla vs. Monster Zero, 1965). In his search for destruction, the monster alternatively teamed up with Gigan and was somehow manipulated by alien races, the Xians, the Kilaaks, and the Spacehunter Nebula aliens.

The new Ghidorah’s (Heisei series) origin lay not in space but in the future. It was created from the atomic fusion of three genetically engineered creatures (called Dorats). His middle head severed by Godzilla, it was revived another time by an evil alien from the future (Futurian), who refurbished him as Mecha-King Ghidorah.