The Wow! signal was a strong narrowband radio signal detected by Dr. Jerry R. Ehman on August 15, 1977, while working on a SETI project at the Big Ear radio telescope of The Ohio State University.

In August 1977, a sky survey conducted with Ohio State University’s “Big Ear” radio telescope found what has become known as the ‘Wow’ signal. Registering an enormous signal strength (60 Janskys in a 10 KHz channel), the shape of the signal had the characteristic rise and fall expected for its short 72 second lifetime. The entire transmission was very near 1420 Mhz, which scientists have identified since 1959 as being (for mathematical and chemical reasons) the most likely frequency to expect a transmission that was intended to seek out alien life. SETI scientists traced it back to the constellation Sagittarius, roughly 2.5 degrees south of the fifth-magnitude star group Chi Sagittarii. But when they looked for the source, there was nothing there, no planet, no star.

But a hitch remains: the signal has not been retrieved from other sky surveys, making it more anomaly than confirmable cosmic source. This odd, one-beam behavior could be caused by an alien transmission that simply went off the air during the 3 minutes between beams.

If the putative aliens permanently shut down their transmitter, then there’s no chance of ever hearing the Wow signal again. Like a single sighting of the Loch Ness monster, we would never be able to prove what it was. But if the signal is periodic – if, for example, the aliens are using a rotating radio beacon that sweeps the star-studded strata of the Milky Way once every five minutes or every five hours – then we could hope to find it by just looking again.

In the years since reception of the Wow! signal, the Big Ear Telescope has been torn down, and the land sold. There was a bit of a scandal when the grounds the telescope occupied were sold, with the scientists working on the telescope project feeling betrayed. A college president resigned over it. A golf course now stands on the spot where Big Ear once was listening.

For the moment, despite the use of the Harvard META SETI system, the Very Large Array (VLA) and the new 26-meter radio telescope in Hobart, Tasmania, Wow has not been detected again.

And yet, the “Wow!” signal is the only reliably recorded sound apparently received from deep space that has the quality of an intentional signal. 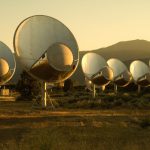