According to Lhwyd´s theory of the "Spermatick Principle" the creation of dragons can be explained by the fecondation of fish’s semen by an eagle or a vulture’s "saline moisture". 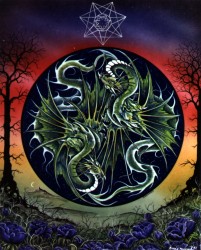 Water contains the spawn not only of fish. When it evaporates the spawn not simply desiccates and dies, but is transferred into a new medium, the air. Later it will be washed to the ground again during rainfalls. We should thus not be astonished by the idea that semen of various animals abounds in the vicinity of an eagle´s or vulture´s eyrie.

Similar to spawn in rock fissures the semen of a single animal is not able to develop a complete, proper creature. But mixed with other sperms it will bring forth a monster or dragon.

The "Spermatick Principle" was only a short-lived episode in the history of palaeontology. However, it gained much popularity amongst common people, so that, e.g., in 1734 Zedler still could attribute the creation of dragons to this hypothesis.