Various cures have been prescribed for removing the werewolf curse.

In antiquity, the Ancient Greeks and Romans believed in the power of exhaustion in curing people of lycanthropy. The victim would be subjected to long periods of physical activity in the hope of being purged of the malady. This practice stemmed from the fact that many alleged werewolves would be left feeling weak and debilitated after committing depredations.

In medieval Europe, traditionally, there are three methods one can use to cure a victim of werewolfism; medicinally (usually via the use of wolfsbane), surgically or by exorcism.

However, many of the cures advocated by medieval medical practitioners proved fatal to the patients. A Sicilian belief of Arabic origin holds that a werewolf can be cured of its ailment by striking it on the forehead or scalp with a knife.

Another belief from the same culture involves the piercing of the werewolf’s hands with nails. Sometimes, less extreme methods were used. In the German lowland of Schleswig-Holstein, a werewolf could be cured if one were to simply address it three times by its Christian name, while one Danish belief holds that simply scolding a werewolf will cure it.

Conversion to Christianity is also a common method of removing werewolfism in the medieval period. A devotion to St. Hubert has also been cited as both cure for and protection from lycanthropes. 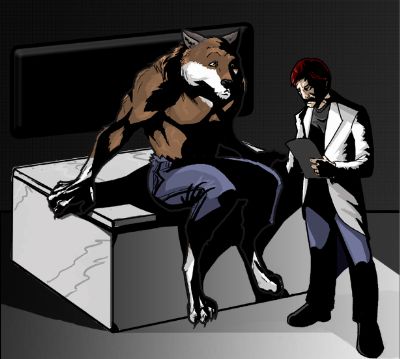 Have the Werewolf drink milk and whey for 3 days

In England, rye, cinder, mistletoe, silver and ash trees are good means of protection and you can get away from a werewolf and be safe by climbing up into such a tree.

Rub the Werewolf’s nostrils with opium before bed

Here is a recipe taken from a German legend :

Another popular means of protection is water. This can be based upon the relation of lycanthropy and hydrophobia, since a real canid who is affected by this disease fears water. Sweet water baths are then highly recommended.

“[A] werwolf is sprinkled with a compound either of 1/2 ounce of sulphur, 4 drachms of asafoetida, 1/4 ounce of castoreum; or of 3/4 ounce of hypericum in 3 ounces of vinegar; or with a solution of carbolic acid further diluted with a pint of clear spring water. The sprinkling must be done over the head and shoulders, and the werwolf must at the same time be addressed in his Christian name.”

Other cures, however, were simpler, such as being saluted with the sign of the cross, or to be called three times loudly by the baptismal name, or to be struck three blows on the forehead by a knife, or to have three drops of blood drawn from some part of the body.

In many cases one other person besides the transformed man was in possession of certain formulae necessary for restoring him to a normal appearance, and if by any accident this person was killed or otherwise removed from the sphere of action, woe betide him in animal shape, for he probably had to retain it during the rest of his natural existence.