In Germany, the werewolf is called a böxenwolf.

Böxenwolves are humans who are in league with the devil and who can assume the form of animals by buckling a strap about themselves. Then they cunningly attack and torment other people. They can be exposed by throwing a piece of steel over them.

In the entire region between the Deister River and the Weser River they tell about the böxenwolf who at nighttime preys upon travelers, making them carry him part of the way. Such a böxenwolf is actually a human who transforms himself and gains superhuman strength by putting on a strap.

Late one evening two peasants were returning home from a mill not far from Rinteln. Each was carrying a sack of flour. A böxenwolf confronted one of them. He immediately called out for help to his companion, who threw down his sack and attacked the böxenwolf so furiously with his stick, that the böxenwolf turned and fled.

The next day they went to another peasant. They had long suspected him, because was rich, but no one knew the source of his wealth. He was lying in bed, deathly ill. He had the surgeon come and bind his wounds. Thus they discovered who had been the böxenwolf.

Source: A. Kuhn and W. Schwartz,

Two hundred years ago for a time there was a frightfully large number of werewolves in the city of Greifswald. They were especially prevelant in Rokover Street.

From there they attacked anyone who appeared outside of their houses after eight o’clock in the evening. At that time there were a lot of venturesome students in Greifswald.

They banded together and one night set forth against the monsters. At first they were powerless against them, until finally the students brought together all of the silver buttons that they had inherited, and with these they killed the werewolves. 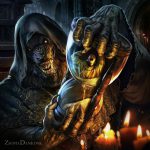