The Lambton Worm of Durham 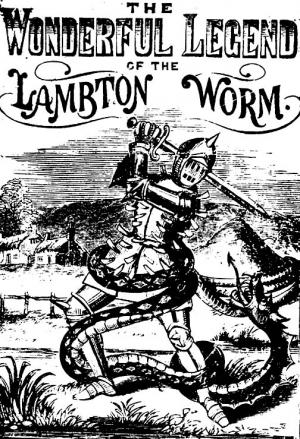 Origin: The Lambton Worm of Durham was known for its size, draping itself around Worm Hill, Durham, Scotland.

Myth:  this serpent was originally caught when it was a baby by a man named Lambton while he was fishing. Disgusted by its appearance, needle-like teeth, slimy, and evil, he threw it into a nearby well. Unknown to him, it grew  to enormous proportions and thrived until it began to feed of the villagers. The dragon had been in many battles and was hacked to pieces, but has always managed by mysterious powers to heal again. Lambton came back and discovered what had occurred. Under the advisement of a witch, he wore a suit of armor covered in spikes and chopped the Worm to pieces in the river where the pieces of the dead worm drifted away and were unable to reform. The witch also told him that he had also to kill the next creature he saw after the killing. Unfortunately, he saw his own father, of whom he could not kill. It was said that the Lambton family was cursed for the next nine generations, and doomed to die abroad, and never at home.

The Dragon of Loschy Hill

The Dragon of Loschy Hill in Yorkshire was slain by Peter Loschy. This dragon was known for having a deadly tongue with a poisonous lethal outcome and teeth that were reputed to be equal to the size of pitchfork prongs. When Peter Loschy attacked the dragon he hacked away at the tongue until it was dead, whilst his faithful hound carried the pieces away. It is said that the hound was so happy to serve his master that after completing the task he licked his master’s face. Alas this served as an ill-omen for both of them, with the poison taking hold.

In Orkney, off mainland Scotland (UK), the ‘Meister Stoor Worm’ menaced the local people but was finally overcome when an unnamed local threw a blazing pitch tipped with a spearhead down the throat. According to legend the corpse of the dragon was huge, so big in fact that as it was dying it spat it’s teeth out which became the Faroes and it’s body became Iceland.

The Dragon snakes of Penllyne

Flying snakes with beautiful feathers have been observed around 1812 (Wales). Unfortunately, local people killed them all because they ate all the chicken around.

The Dragon of Knucker Hole

A water dragon who lived at Knucker Hole at Lyminster, Sussex, England caused many problems in the Lyminster area, carrying off animals and people, and generally being a nuisance. Eventually Knucker was killed, although there are several different versions of the story describing this event.

In one version the King of Sussex offered his daughter in marriage to anyone who would kill the dragon. It was said that a wandering knight battled Knucker, killed him, married the princess, and then settled in Lyminster.

The second version of Knucker’s end said that Jim Pulk, a local farmer’s boy, outwitted the dragon. He cooked the dragon a poisoned Sussex pie, which the dragon ate, then died. Knucker got his revenge in the end though, because after Jim when off to celebrate he fell down dead. Probably he hadn’t washed his hands after baking the poisoned pie. The third version also has a local man outwitting Knucker, in a similar way. This man is called Jim Puttock, and comes from Wick. In this version it is the Mayor of Arundel offering a reward. Unlike Jim Pulk, Jim Puttock does not die at the end.