Not far to the west of Alice Springs at the foothills of the southern slopes of theMacDonnell Range
This ‘Top Secret’ base is entirely financed by the United States Government, and is officially known as the Joint Defense Space Research Facility. “It is said that under Pine Gap is the deepest drilling hole in Australia – about 5 miles (more than 8,000 meters).

Such a hole is likely used as an underground antenna able to recharge the batteries of submarines in the Pacific and Indian Ocean through ELF broadcasts. Some say that Pine Gap has an enormous nuclear generator to supply energy to a new type of transceiver.

It seems too that there is a high-powered, high-voltage plasma accelerator which may be put to use to transmit electric current, or even to produce a ‘death-ray’, or quite simply to feed a plasma gun.

Vast cavern systems below Tibet allegedly link the Agharti systems of central Asia to “Snakeworld”, a multileveled cavern system under the southwestern slopes of the Himalayas where the “Nagas” dwell, according to Hindu legend.

According to the explorer Nicholas Roerich, there are caves in the Himalayan foothills that have subterranean passages. In one of the these passages, there is a stone door that has never been opened, because the time for its opening has not yet arrived.

In 1930, Doreal founded the Brotherhood of the White Temple. He says that the entrance to Shamballa is far underground. he goes on to say that space bends around Shamballa, and that there is a warp which leads into another universe.

Under the border range that separates Afghanistan from Pakistan.

The Nyala range, west of Kindu, the area borth of the Libyan border in Egypt.

There is allegedly, according to Leading Edge Research, a huge cavern deep beneath Egypt which is inhabited by people with close ties with the U.S. ‘secret government’. Some sources indicate that the ‘Giza People’ may be a ‘controlled’ society with the reptilians being the dominant power, although there is still much mystery as to what the “Gizeh Empire” is all about.

The Maltese Cave entrance, known as Hypogeum of Hal Saflienti,  is located on the island of Malta, near the  village of Casal Paula, which overlooks the town of Malta. In 1902, workmen digging a well in Casal Paula reportedly fell into a subterranean cavern which connected  to an entire complex of caves and tunnels.

This discovery led to be a complex of cave, three of which were a series of chambers excavated out of solid rock on three even lower levels for each chamber. This series of underground rooms. When first explored, they found over 30,000 skeletons of men, woman and children inside.

The tunnels under the Hypogeum were later  sealed off after 30 students entered the caves on a field trip and disappeared without a trace. The numerous efforts of search parties looking for the children and guide were in vain.

Underneath the mountain, legend says, there is a huge cavity with a lake, on which space-ships can sail, until such time as alien hidden there need to return to their native planets, purportedly at the End of the Times according to local Armaggedon sects.

High Loire (Pradelles), Ariège (Miglos), the Pilat (Annonay), the Ardeche (St Pierreville) the Maritime Alps (Falicon) and Provence (the plate of Clansaye, Baux of Provence) are other places that are allegedly connected to the underground empire.

The Livobba Cave is located in the province of Zapoteca, somewhere near the ancient village of Mictlan (the village of the Underworld).
The Cavern of Death was located in the last chamber of an eight chamber building or temple. This temple had four rooms above the ground and four more important chambers built below the surface of the Earth. This building was located in Theozapotlan and the tunnel entrance leads  beneath the mountain.
After the conquest of South America by the Spanish Conquistadores, the Catholic priests who were attempting to convert the heathen Indians discovered a cave entrance to what they called “Hell.” This entrance has since been sealed off with tons of rubble, dirt and huge stones and boulders.

A massive joint humanoid-reptiloid underground system called the “New Berlin” is said to lie below the mountains of Neu Schwabenland, Antarctica.

Sherman Minton states that “Sheshna’s well”, an alleged opening into the underground reptilian underworld of “Patalas” [consisting of seven worlds or cavern levels], may be seen today in Benares, India, and “…It has forty steps leading down into a circular depression to a stone door covered with cobras. This is said to lead to PATALA, the reptile netherworld. 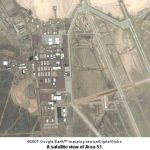