Circles since ancient times have been reputed for magical properties. They were drawn around beds of the sick and mothers who recently bore children to protect them from demons. Their remnants which are seen in the stone circles of Britain give credence to the importance of the circle.

In occultism and magic, the magic circle is a sacred and purified space where all rites, magical work, and ceremonials are conducted.

Traditionally, circles are believed by ritual magicians to form a protective barrier between themselves and what they summon. It serves as a boundary for a reservoir of concentrated power and is the doorway from this world to the spirits and gods.

The circle also serves to protect those within it from negative spirits and energies. Circles were frequently cast for protection in order to ward off psychic attacks or physical intrusion of a home.

One text known as the Heptameron says of the circle, ‘But because the greatest power is attributed to the circles; (for they are certain fortresses to defend the operators safe from the evil spirits); in the first place we will treat concerning the composition of a circle.’ [

Circles may or may not be physically marked out on the ground, and a variety of elaborate patterns for circle markings can be found in grimoires and magical manuals, often involving angelic and divine names. Such markings, or a simple unadorned circle, may be drawn in chalk or salt, or indicated by other means such as with a cord.

In Wicca, as also in traditional European grimoires, a magic circle is typically nine feet in diameter, though the size can vary depending on the purpose of the circle, and the preference of the caster.

Some varieties of Wicca use the common ceremonial colour attributions for their “quarter candles”: yellow for Air in the east, red for Fire in the south, blue for Water in the west and green for Earth in the north (though these attributions differ according to geographical location and individual philosophy).

The common technique for raising energy within the circle is by means of a cone of power.

The barrier is believed to be fragile, so that leaving or passing through the circle would weaken or dispel it. This is referred to as “breaking the circle”. It is generally advised that practitioners do not leave the circle unless absolutely necessary.

In order to leave a circle and keep it intact, Wiccans believe a door must be cut in the energy of the circle, normally on the East side. Whatever was used to cast the circle is used to cut the doorway, such as a sword, staff or knife (athame), a doorway is “cut” in the circle, at which point anything may pass through without harming the circle. This opening must be closed afterwards by “reconnecting” the lines of the circle.

The circle is usually closed by the practitioner after they have finished by drawing in the energy with the athame or whatever was used to make the circle including their hand (usually in a widdershins: that is, counter-clockwise fashion). This is called closing the circle or releasing the circle. The term “opening” is often used, representing the idea the circle has been expanded and dissipated rather than closed in on itself. 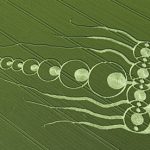