The name loogaroo occurs in islands or, in the case of Haiti, part of an island that was colonized by the French who imported African slaves to do the hard labor on their plantations. The name loogaroo is obviously derived from loups garou, a French name for the werewolf which literally means “wolf-man” and was originally applied in France to werewolves. But the loogaroo exists primarily in Afro-Carribean lore and no doubt is more closely a derivative of West African vampiric witches such as the obayifu and the asiman.

According to the Voodoo lore of Haiti, the loogaroo is most often a woman. At night she frees herself of her skin by rubbing a magical concoction made of herbs on her body. She then hides her skin in a cool place where it will not shrink. She then makes certain movements which cause turkey wings to sprout on her back.

Flames shoot out from her armpits and anus. She then flies through the thatch of her hut. Flying though the sky, she leaves a luminous trail behind her. She sucks the blood of her victims, most often infants and children, and causes them to have illnesses which are sometimes fatal.

To enter a dwelling where her little victim lies, the Haitian loogaroo takes the form of a cockroach or some other insect. She may also insert a long straw through the thatch composing the walls of a dwelling until it rests against her victim’s cheek. She then sucks the blood through the straw. Her nocturnal flights for prey occur on the 7’th, 13’th, and 17’th of each month.

On the island of Granada, the loogaroo is also most often a woman. She flies each night. In her natural human form, she goes to a silk-cotton-tree. Botanists call this tree by the Latin name bombax ceiba. But in Granada it is known as the Devil’s tree or the Jumbie tree. There the woman gets out of her skin which she then carefully folds and hides. Then the loogaroo transforms into a ball of light and flies through the air. The loogaroo in Granada often drinks the blood of adults, causing them to wake up tired and languid. This witch or sorcerer can pass through any tiny crack to get into dwelling. But if enough grains of rice or sand are scattered around the outside of the dwelling, he or she is compelled to count them until dawn.

The soukoyan is part of the lore of the islands of Dominica and Trinidad. According to one account from Trinidad, the soukoyan is much like the loogaroo of Granada. The soukoyan leaves his or her skin at night in a cool place and flies off at night in the form of a ball of light to drink the blood of humans. In one account there is added the detail that she can be destroyed if salt is poured on her skin to shrink it. In an account from Dominica that I’ve read, the loogaroo is most often a man.

For more details on this subject, see The Vampire Book by J. Gordon Melton (Visible Ink Press, 1994, 1999), The Vampire: His Kith and Kin by Montague Summers (originally published in 1928, most recently reprinted under the title The Vampie by Dorset Press in 1991), and Voodoo in Haiti by Alfred Metaux (Schoken Books, 1972). 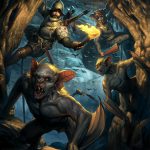