South America has not been an area rich in vampire lore, however, the fact that vampire bats are native to the continent suggests that some recognition of vampirism would have appeared in the continent’s folklore—and such is the case. Aztec mythology described tales of the Cihuateteo, skeletal-faced spirits of those who died in childbirth who stole children and entered into sexual liaisons with the living, driving them mad.

The Asema: Among the South American vampires, for example, was the asema of Surinam. The asema was very much like the loogaroo of Haiti and the sukuyan of Trinidad—all three were derived from the vampire/witch of West Africa.

The Asema takes the form of an old man or woman who lived a normal community life during the daylight hours, but a quite different secret existence after dark. At night, it had the ability to transform into a vampire.

It did so by taking off its skin and becoming a ball of blue light. In that form, it is said that the asema flew through the air, entered houses in the village, and sucked the blood of its victims. If it liked the blood, it would continue taking it until the person died. Also, as with the loogaroo, garlic was the best protection against the asema. Herbs might be taken to turn the blood bitter so the asema would not like it, a practice noted in both Haiti and Africa. Further protection came from scattering rice or sesame seeds outside the door.

The seeds would be mixed with the nails of a ground owl. The asema had to pick up the seeds before entering, but because of the nails it would continually drop them. If it remained at its task until dawn, the sunlight killed it.

Those who were suspected of being an asema were placed under surveyance. Their identity could be determined by watching them take off their skin. The skin was then treated with salt or pepper so that it shrank, and the vampire could not get back into it.

The Loogaroo is an example of how a vampire belief can result from a combination of beliefs, here a mixture of French and African Vodu or voodoo. The term Loogaroo possibly comes from the French loup-garou (meaning ‘werewolf’) and is common in the culture of Mauritius. However, the stories of the Loogaroo are widespread through the Caribbean Islands and Louisiana in the United States.

The Lobishomen: From Brazil, accounts of the lobishomen have survived, described as a small, stumpy, and hunchbacked monkey-like being. It had a yellow face, bloodless lips, black teeth, a bushy beard, and plush-covered feet. It attacked females and caused them to become nymphomaniacs. It would become vulnerable when drunk on blood, thus making it easier to catch. It could then be crucified on a tree. The lobishomen was not a vampire, however, but the Portuguese form of a werewolf. It was created through witchcraft or from parents who were improperly cohabiting (incest). Its werewolf-like nature appeared about the time of puberty when it left home and, for the first time, assumed the form of one of several animals. From that time on, usually on Tuesday and Thursdays, it assumed an animal form. In its human form, it could be identified by a yellowish tinge to its skin and blisters on its hands from running in the woods. The werewolf condition could only be stopped if the lobishomen was cut with steel. Care had to be taken not to touch the werewolf’s blood, however, because it was fatal. The fact of its transformation into different animals tied the werewolf to the bruxa, the Portuguese witch, who was the more vampire-like entity in Portuguese mythology.

The Chupacabra is said to have originated in Mexico but sightings have been reported all over the world. The Chupacabra feeds only on animals, mostly goats. They are said to drink the blood of the animals as well as the organs and leave them for dead. Reports vary to describe Chupa true shape, which may induce it is a shapeshifter. More about chupacabra

The Cinematic Vampire: The vampire made periodic appearances in the movies of South America, primarily in Argentina and Brazil. The first South American vampire movie was El Vampiro Negro (1953) directed by Roman Vinoly. It was based upon the true case of Peter Kürten, the vampire of Düsseldorf. It was almost two decades later before a second film, El Vampiro Archecha, a joint Argentine-Mexican picture, was produced. This movie was notable for its inclusion of German Robles in the cast.

Brazil produced its first vampire film in 1969/70. The movie was Um Sonho de Vampiros (In English: A Vampire’s Dream), a comedy about a doctor who had to choose between death or vampirism. Others released through the decade include O Macabro Dr. Scivano (1971), Quem tem Medo de Lobishomem (1974), and A Deusa de Marmore Escrava do Diabo (1978).

Quem tem Medo de Lobishomem has been commonly reported in vampire filmographies because of the misunderstanding that the lobishomen was a vampire rather than a werewolf. Over the last quarter century, only a very few vampire movies have been made in South America: As Sete Vampiros (In English: The Seven Vampires, 1986), Sangre eternal (Eternal Blood, 2002), Tremendo Amanecer (Tremendous Dawn, 2004), and Mala Carne (Carnal, 2004). 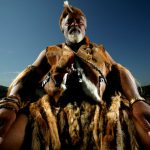 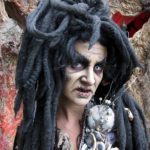