Der müde Tod silent movie (1921)
When a woman’s fiancé disappears, Death gives her three chances to save him from his fate.

Death Takes a Holiday movie (1934)
The Grim Reaper takes the form of a Prince in an attempt to relate to humans and, along the way, also learns what it is to love.

The Seventh Seal (1957)
A knight returning to Sweden after the Crusades seeks answers about life, death, and the existence of God as he plays chess against the Grim Reaper during the Black Plague.

The Big Chill (1983)
A group of longtime friends meets together for the funeral after a friend commits suicide. They discuss unresolved issues with one another and the deceased.

Stand By Me (1986)
Four boys travel to look for the dead body of a stranger who was in an accident nearby. Along the way, they encounter danger and setbacks that bond them together, helping them reevaluate their individual lives.

Beetlejuice (1988)
A couple who recently died in a car accident is unable to leave their home, and they try to scare off the new tenants. Their hijinks attract Beetlejuice, a lively spirit who tries to help.

Field of Dreams (1989)
A man, inspired by his late father, turns his cornfield into a baseball field. In the process, he feels closer to the memories of his father. The movie about grief is a remarkable ode to America’s favorite pastime: baseball.

“You know we just don’t recognize the most significant moments of our lives while they’re happening. Back then I thought, well, there’ll be other days. I didn’t realize that that was the only day.” – Dr. Archibald “Moonlight” Graham

Steel Magnolias (1989)
Shelby prepares her wedding, surrounded by her mother and family friends. Shelby’s illness takes them through ups and downs together. Their world shatters as Shelby’s illness leads to death.

“I just sat there. I just held Shelby’s hand. There was no noise, no tremble, just peace. Oh god. I realize as a woman how lucky I am. I was there when that wonderful creature drifted into my life and I was there when she drifted out. It was the most precious moment of my life.” – M’Lynn

The Doors (1991)
In Oliver Stone’s film Jim Morrison is haunted by Death, appearing in several scenes portrayed by Richard Rutowski. Death can be seen dancing behind him in orgiastic concert scenes or appearing in the background watching Morrison at bars, parties or on the street. In a scene deleted from the theatrical release, Death bumps into Morrison at an airport bar, heavily intoxicated and on his way to the ill-fated Miami show in 1969, inquiring, “how’s it going?” and closing with a cryptic, “See you around, Jim.”

My Girl (1991)
11-year-old Vada has an obsession with death, and for good reasons – her mother died during childbirth, and her father runs a funeral service from their home. After her best friend Thomas J dies suddenly, Vada works through her fascination with death in a healthy way.

“I’m not asking you to stop caring for those people. But life isn’t just death, Harry. Don’t ignore the living… especially your daughter…” – Shelly

Ghost (1990)
This thriller focuses on the story of a young woman in danger, while the ghost of her murdered husband recruits a psychic to help him save her.

Now and Then (1995)
Four women reunite as adults and reminisce on a pivotal summer in their friendship. That summer, the girls helped Roberta overcome her mother’s death, and they also set off to uncover the mystery of an unsolved death in the town.

The Frighteners (1996)
After a tragic car accident that kills his wife, a man discovers he can communicate with the dead to con people. However, when a demonic spirit appears, he may be the only one who can stop it from killing the living and the dead.

Meet Joe Black (1998)
Bill is about to turn 65 when Death visits him in the form of a young man named Joe Black. They make a deal to let Bill live a few extra days while Death gets to discover what it’s like to be alive.

The Sixth Sense (1999)
This psychological thriller tells the story of a child psychologist who works with a young boy patient who can see the dead. They form a bond and work together to help each other.

“I know what I want: I want to be able to talk to my wife again. The way we used to talk to each other. Like there’s no one else in the world except us.” – Dr. Malcolm Crowe

Final Destination (2000)
After receiving a premonition they will die in a mass-casualty event, a teenager changes their course to avoid the event. The main character and other people who avoided the accident still die anyway, in random, unrelated ways.

The Bucket List (2007)
Two men nearing the end of their lives find themselves in the same hospital room. After creating a list of things to achieve before death, they leave the hospital against the doctor’s orders and set out to fulfill the items on their bucket lists.

Bridge to Terabithia (2007)
Two young friends create an imaginary kingdom for themselves, using the forest they access by swinging on a rope as their inspiration. When Leslie dies in an accident, Jesse is left to grapple with her death.

“She had tricked him. She had made him leave his old self behind and come into her world, and then before he was really at home in it but too late to go back, she had left him stranded there–like an astronaut wandering about on the moon. Alone.” -Katherine Paterson

Marley and Me (2008)
John and Jenny adopt a puppy to try their hand at caretaking before having children. The dog, Marley, is a cherished member of the family through ups and downs. The family stays by Marley’s side when he eventually reaches the end of his life.

Funny People (2009)
A comic, George, receives a fatal disease diagnosis and chooses to mentor a struggling comedian. When George’s illness goes into remission, he has a chance to evaluate what’s really important in life.

My Sister’s Keeper (2009)
Anna was born for the purpose of being a bone marrow donor for her terminally ill sister. While her sister’s life is undoubtedly prolonged because of Anna, the countless surgeries and treatments lead Anna to seek emancipation from the family.

“Sometimes I wonder what would have happened if Kate had been healthy, I’d probably still be up in heaven or wherever, waiting to be attached to a body down here on earth, but coincidence or not, I’m here.” – Anna Fitzgerald

The Lovely Bones (2009)
A teenage girl, who was murdered, watches from heaven as her family and friends navigate life and move past her death.

“These were the lovely bones that had grown around my absence: the connections-sometimes tenuous, sometimes made at great cost, but often magnificent-that happened after I was gone. And I began to see things in a way that let me hold the world without me in it. The events that my death wrought were merely the bones of a body that would become whole at some unpredictable time in the future. The price of what I came to see as this miraculous body had been my life.” -Susie

Death at a Funeral (2010)
A series of mishaps occur as a son tries to plan the funeral of his deceased father. Family drama and a stranger with a big secret threaten to ruin the funeral altogether.

The Descendants (2011)
Matt and his family live in Hawaii when his wife is in a coma after a terrible accident. Matt struggles with the decision on whether to end his wife’s life support, while raising his daughters and juggling family demands.

Extremely Loud and Incredibly Close (2011)
After his father dies in the September 11th attacks, a 9-year-old boy discovers his father’s key. He goes on a journey through New York to find closure concerning his father’s death.

“So many people enter and leave your life! Hundreds of thousands of people! You have to keep the door open so they can come in! But it also means you have to let them go!” – Mr. Black

This Is Where I Leave You (2014)
After their father’s death, four siblings come together and stay with their mother for a week. They analyze all of their failed relationships, reminisce, and learn about each other more deeply.

Me and Earl and The Dying Girl (2015)
Greg and Earl are high schoolers who make parodies of classic films. Their lives change forever when they meet a new friend who has a recent cancer diagnosis.

Movies about games with death

In 1957, Swedish director Ingmar Bergman made The Seventh Seal, an influential (and heavily symbolic) movie depicting one of the most famous moments in the fictional portrayal of Death. In the movie, a medieval knight plays a game of chess with Death, with the knight’s life depending upon the outcome of the game. The concept of playing games with Death has been used (and spoofed) many times since Bergman’s movie.

A 1968 short film called The Dove deliberately spoofed this famous movie scene, a young couple challenge Death to a game of badminton.

Bob Burden’s surrealist comic book, “The Flaming Carrot“, features a cover in which the title character rejects Death’s offer of playing chess and suggests instead Jarts.

In Bill & Ted’s Bogus Journey, the brainless protagonists challenge Death to a series of inane games including Battleship (game), electric football, Cluedo (Clue) and Twister – all of which Death loses (each time gruffly demanding a rematch).

In the Arnold Schwarzenegger movie Last Action Hero, the character of Death from Bergman’s Seventh Seal is brought into the real world temporarily, played by Ian McKellen.

In the short-lived TV series Big Wolf on Campus the main character goes on a frantic gaming spree in which he loses several games to Death, a reverse-spoof of Bill and Ted, as well as Ingmar Bergman.

Flash cartoon Weebl & Bob parodied this concept in their episode “Art”. Death is portrayed by Monkey, and the characters are sitting on a chessboard, while Weebl & Bob bemoan (naturally) their lack of pie. 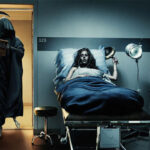