Momo (short for ‘Missouri Monster’) is the name of an alleged hominid, similar to the Bigfoot, which is reported to live in Missouri.

Description: Momo is reported to have a large, pumpkin-shaped head, with a furry body, no apparents neck and hair covering the eyes. 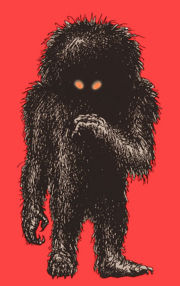 Description: a large black and hairy creature 6 or 7 feet tall with

Sightings: First reported in July 1971, near Louisiana, Missouri by Joan Mills and Mary Ryan, Momo has been spotted up and down the Mississippi River. It is supposedly a large, 7 ft (~2.1 m) tall, hairy, black, manlike creature that eats cats and emits a terrible odor. Some suggest it was a rogue black bear.

Following sightings in 1972 beginning at 3:30 p.m. July 11, first reported by Terry, Wally, and Doris Harrison, and lasting for about 2 weeks, tracks were found and submitted to Lawrence Curtis, director of the Oklahoma City Zoo and Botanical Garden. He deemed the tracks to be a hoax