Christianity is a  blood based religions. Old Testament writers describe blood sacrifices in painstaking details and their New Testament counterparts layer those symbols with theological meanings.  Most medieval representations of the Christ displays blood spuring copiously from Christ’s five wounds, emphasizing the full humanity of Christ.

From a biblical perspective, as noted by Stephen Peele (The Blood of the Covenant, 2003):

“Blood to the believer is like oil to an engine, neither can survive without it”

Blood is understood as an appeasement to God, first exemplified in the Garden of Eden by his slaughter of two animals to cover the sins of Adam and Eve.

The Mystery of the Eucharist

Key to the Christian dogma is the sacrifice of Christ, the Second Person of the Trinity, to save humanity, the descent and incarnation of God into mortal, suffering flesh and blood. Thus blood comes to symbolize Christ’s love for humanity, and through this love (or blood), the promise of eternal life and the resurrection of the body.

This teaching is rooted in the Last Supper, as written in the four gospels of the Bible, in which Jesus stated to his disciples that the bread that they ate was his body, and the wine was his blood.

“I tell you the truth, unless you eat the flesh of the Son of Man and drink his blood, you have no life in you. Whoever eats my flesh and drinks my blood has eternal life, and I will raise him up at the last day. For my flesh is real food and my blood is real drink. Whoever eats my flesh and drinks my blood remains in me, and I in him. Just as the living Father sent me and I live because of the Father, so the one who feeds on me will live because of me”. (John 6:53-37, NIV).

The central Christian ritual, the Eucharist, establishes participation in this redemptive sacrifice at the Mass through the drinking of Christ’s holy blood (and the eating of his body). The doctrine of Transubstantiation expresses this idea clearly: the bread actually becomes Christ’s body and the wine actually becomes Christ’s blood through the mystery of Christ’s sacrifice. This transfiguration from the physical to the spiritual is the opening to eternal life in God.

According to Peele argues, the significance and power of the blood shed by Jesus is demonstrated from eight perspectives:

Peele further indicates the manner in which wine was understood to substitute for blood in celebration:

Wine is often a substitute for blood, not only because of its color but also as a sacramental entheogen to induce a mind-altering state. The Dionysian Mysteries were a ritual of ancient Greece and Rome which used wine, intoxicants, dance and music to remove inhibitions and social constraints, liberating the individual to return to a natural state. 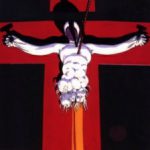