In 1996 the creature resembling alien rather than a human being, was found in the village in Ural region, and only 7 years later, in April 2004, scientists revealed the creature”s real origin.

This story goes back to 1996 to village Kaolinovy near the provincial town of Kyshtym in Chelyabinsk region. The female villager found the weird creature in the outskirts of the village. The creature had tiny onion-shaped head which looked like it was composed of five petals. The little creature had no ears, huge slanting catlike eyes occupied the biggest part of its face. The creature could not talk, but it started whistling quietly to attract the lady”s attention.

The story translated by PRAVDA describes the creature”s death and mysterious disappearance.

Famous expert on UFOs Vadim Chernobrov followed the story from the very beginning. He conducted his own investigation and received the fabric the creature was wrapped in. Chernobrov passed the fabric to Moscow Institute of General Genetics for DNA analysis.

On April 15, 2004 the scientist made an official statement, “The analysis of the blood spots on the fabric detected DNA of a human being. We proved that Kyshtym creature was a prematurely born female baby with many deviations”.

So, no sensation happened. Aleshenka was not an alien. However, there are still questions to answer. How could such a creature be brought to life? Could the pollution of the environment influence the creature? Does the fact that such a creature was born, mean that a human being is degrading?

Surprisingly, the press did not describe in details the area where Aleshenka was born. Village Kaolinovy is located in the Southern Urals, near towns Kyshtym and Ozersk. One of the biggest Russian plants producing chemicals – “Mayak” – is located in Ozersk. According to Belluna ecological organization, the plant had 6 nuclear reactors which produced plutonium for nuclear weapons. For a long time the plant was releasing radioactive waste into atmosphere. On September 29, 1957 an accident took place at the plant, as a result a part of Chelyabinsk, Sverdlovsk and Tyumen regions were polluted.  108 thousand curies of radioactive element strontium were released into atmosphere. It could be compared with Chernobyl where 216 curies of strontium were released. The polluted area was 105 kilometers long and 8-9 kilometers wide. The victims of radioactive pollution were in all the hospitals of Chelyabinsk region.

Academician Yury Zakharov disregards that version that the creature”s deviations were caused by radiation, “Indeed, the environment is polluted in the Southern Urals. There have been some mutations of animals and plants in the region, but believe me – radiation cannot influence human organism this much to cause mutation”.

“Person”s exposure to radiation can cause cancer and some other illnesses, but not more than this”, says Academician Anatoly Tsyb.

The only research of the influence of radiation to people was conducted in Japanese cities Hiroshima and Nagasaki in 1946 and revealed that radiation can cause only one kind of mutation in human – small size of brain. However, Aleshenka had different deviations.

Doctor of Biology, Professor Shevtchenko is director of the laboratory of radiation genetics. He researched the fabric the creature was wrapped in.

The Professor told about the interesting research of people under 20 who lived in ecologically safe areas of the USA, France and England. The scientists discovered that people aged infants to 20 years old, have high percentage of genetic anomalies (10.6 percent of the researched people). Obviously, human mutations first of all depend not on the conditions of environment, but on the genetic history of the person, his/her food, social status, access to health care and many other factors.

In the 1980s there was a research of genetic changes in people during the course of their lives. It was discovered that middle-aged people have many diseases genetically “inherited”: diabetes, asthma, glaucoma and a number of heart diseases. Today scientists believe that more than 70 percent of people have some inherited disease during their lives, and these diseases reduce the vitality of people.

This means that spontaneous mutations can take place frequently enough. Many mutations can be accumulated for hundreds of years, and at some point be revealed in a certain individual.

“The anomalies in the creature resulted either from some deep-laid genetic changes or from consuming medicine, alcohol, tobacco or narcotics”.

Nevertheless, genetics are extremely concerned with appearing such freaks of nature as Aleshenka. 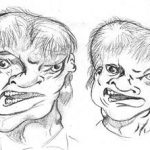