Louse (plural: lice) is the common name for over 3,000 species of wingless parasite insects of the order Phthiraptera; are mostly wingless insects which normally feed on epidermal (skin) debris.

Most lice are scavengers, feeding on skin and other debris found on the host’s body, but some species feed on sebaceous secretions and blood.

Most are found only on specific types of animals, and, in some cases, only to a particular part of the body; some animals are known to host up to fifteen different species, although one to three is typical for mammals, and two to six for birds.

For example, in humans, the head lice (pictured), body lice and pubic lice respectively inhabit the scalp, body and pubic hair. Lice generally cannot survive for long if removed from their host. They use their saliva to attach eggs (or called nits) to their host’s hair. 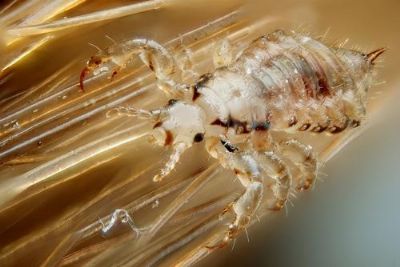 The problem of head lice in schools has given that species more notoriety, but body lice are the only ones that spread disease. Typhus, trench fever and relapsing fever can all be transmitted by body lice, although in the U.S. they’re mostly found among homeless people or others who don’t have access to regular bathing or changes of clean clothes.