Lampreys (sometimes also called lamprey eels), which evolved some 250 million years ago, are a family of elongated jawless fish, whose adults are characterized by a toothed, disc-shaped sucking mouth. 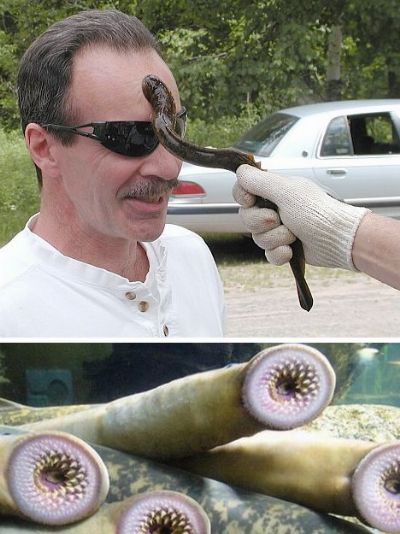 Lampreys spend most of their lives as harmless larvae; it can take them seven years to mature. But when they do become adults they become vicious, successful hunters.

Lampreys  feed on prey as adults by attaching their mouthparts to the target animal’s body, then using their teeth to cut through surface tissues until they reach blood and body fluid. An anticoagulant in the lamprey’s saliva keeps the wound open for hours or weeks, until the lamprey is satiated or the host fish dies.

Lampreys can grow up to 40 inches (100cm) in length, often longer than their prey. Not all lampreys are carnivorous, and they will generally not attack humans unless starved.

Lampreys live mostly in coastal and fresh waters, and are found in most temperate regions except those in Africa. Their larvae (ammocoetes) have a low tolerance for high water temperatures, which may explain why they are not distributed in the tropics.

Lampreys are considered to be a highly prized  delicacy in parts of Europe (Portugal, Spain, and France) where they have been described as being more “meaty” in consistency compared to other fish.