The hierarchical structure of Vampyre culture is referred to as The Three Pillars.

The lowest level consists of Fledglings who are either new to the lifestyle, inexperienced, or who are children of Vampyre adults. They are signified by having no prefix before their name and no stone in their sigil.

After a period of initiation Fledglings can become Calmae, which signifies experienced members of the Clan, coven, or circle, and they wear a red stone in their sigil. 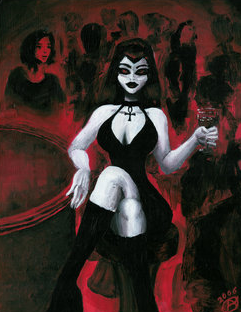 The highest level is that of the Elders who are the most experienced and influential members of the Sanguinarium. They consist of leaders and founders of clans, owners of havens and fangmakers (dentists who make permanent fangs for members), and they have a purple stone in their sigil. Elders can be Makers or Sires (they guide and protect a new person in the scene during their Awakening, and later) whilst the Family Dentists are responsible for getting people in touch, and encouraging connections between Covens and Clans.

A Sire is a Vampyre parent, including parent and child, lovers, friends–anyone who guides a fledging to his Vampyre nature. A Childe is a fledgling who is apprenticed to a "Sire" and taught the Black Veil and the ins-and-outs of the Vampyre scene. Once they have learned these rules, they can be presented to the Elder of their household or Court through a ceremony of recognition. Mundanes signify non-Vampyres and people who do not support the lifestyle.

Swans refer to those who are aware of the culture but choose not to partake. Black Swans are people who are tolerant of the lifestyle while White Swans are those who disapprove and try to persuade family members or friends to get out of the scene.

Invisibles are those members of the community who, having been ostracized and stripped of their name, are treated as if they no longer existed. Invisibles have committed some great crime in the eyes of the community, and for this they are no longer allowed to associate themselves with the rest of vampire culture.