Ever since the ending of the Witch Hunt, various scholars have estimated how many men, women and children were executed for witchcraft across Europe and North America, with numbers varying wildly depending on the method used to generate the estimate.

In the 19th century, historians were still unsure as to the exact number, for instance the German folklorist Jacob Grimm claimed that the number was simply “countless” whilst the Scottish journalist Charles Mackay believed that it was “thousands upon thousands.”

The nine million figure is ultimately due to Gottfried Christian Voigt, who based his estimate on twenty cases recorded over fifty years in the archives Quedlinburg, Germany. Voigt then extrapolated this number to the entire population of Europe over the full 1,800 years of Christian history.

Voigt’s number was rounded off to nine million by Gustav Roskoff in his 1869 Geschichte des Teufels (“History of the Devil”). It was subsequently repeated by various German and English historians, notably the 19th century women’s rights campaigner Matilda Joslyn Gage or later writers such as Gerald Gardner.

Nazi propaganda, which in the 1930s used witches as a symbol of northern völkisch culture, as opposed to Mediterranean or “Semitic” Christianity. Within several decades, the American suffragette Matilda Joslyn Gage had claimed that nine million women had been killed in the European trials, a figure which would be repeated by a number of, although it has since been described as having “no rational basis whatsoever” by the professional historian Ronald Hutton.

In the latter part of the 20th century, as historians began to study the witch trials in greater depth, the estimated number of executions began to be reduced, with the historian Norman Cohn, in Europe’s Inner Demons (1975) criticising claims that they were in the hundreds of thousands, calling these “fantastic exaggerations”.

Attempting to come to an accurate figure, the historian Brian Levack, author of The Witch Hunt in Early Modern Europe (1987), took the number of known European witch trials and multiplied it by the average rate of conviction and execution.

This provided him with a figure of around 60,000 deaths, however, for the third edition of the work (2006) he later reassessed that number to 45,000. This number was criticised as being too low by Anne Llewellyn Barstow, author of Witchcraze: A New History of the European Witch Hunts (1994) – a work which was derided as un-scholarly and “largely ignored by academics” – who herself arrived at a number of approximately 100,000 deaths by attempting to adjust Levack’s estimate to account for what she believed were unaccounted lost records.

The period considered is roughly 1500-1650. There were few (~500) executions for witchcraft before 1500. It was a phenomenon of the Renaissance rather than of the Middle Ages.

The Holy Roman Empire figure includes the Netherlands, Belgium, Luxembourg, Switzerland, and parts of modern France, as well as Germany and Austria. Poland was a huge country back then as well. Both Catholic and Protestant states persecuted witches. The low number of executions in Italy and Spain is due to the fact the Spanish Inquisition was more interested in heretics and in relapsed converts from Judaism, Islam, etc. than in accusations of witchcraft.

In most areas most of the victims (roughly 3/4) were female. Notable exceptions include Finland, Estonia and Russia, but the total numbers from these countries are not large.

Ronald Hutton, in his unpublished essay “Counting the Witch Hunt”, counted local estimates, and in areas where estimates were unavailable attempted to extrapolate from nearby regions with similar demographics and attitudes towards witch hunting. He reached an estimate of 40,000 total executions. 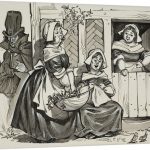